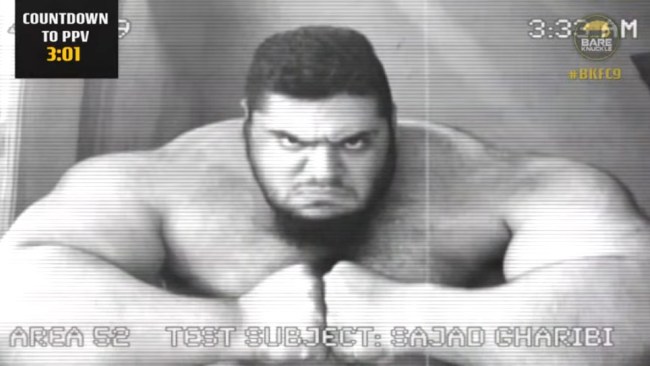 One year ago, almost to the day, it was announced that the man known as the “Iranian Hulk” Sajad Gharibi was going to take part in an MMA fight against “The Scariest Man on the Planet” Martyn Ford for Polish promotion KSW. Sadly, that did not happen.

Then, in April of 2019, the “Iranian Hulk” AKA “Persian Hercules” again claimed he was going to be in an MMA fight against “a Brazilian fighter before 2020.” That fight, supposedly against Romario dos Santos Alves, too will not happen.

But now, NOW Gharibi has signed on with the Bare Knuckle Fighting Championship to compete at some undetermined date in 2020. At least according to the promo that aired at the end of the BKFC 9 preliminary broadcast on Saturday.

As for who will be getting into the circular four-roped ring with the “Iranian Hulk” we’ll just have to wait and see. BKFC president David Feldman says the league will be holding tryouts to find the 27-year-old, almost 400-pound “Persian Hercules” an opponent.

“This guy’s going to make his Bare Knuckle Fighting Championship debut in early 2020,” Feldman told MMA Fighting. “We’re going to do a show entitled ‘USA vs. Iran: World War III.’ He’s literally our biggest signing we’ve ever had. But he’s going to make his way over to Bare Knuckle Fighting Championship, he’s gonna make a home here, and we expect really, really big things from ‘The Iranian Hulk.’”