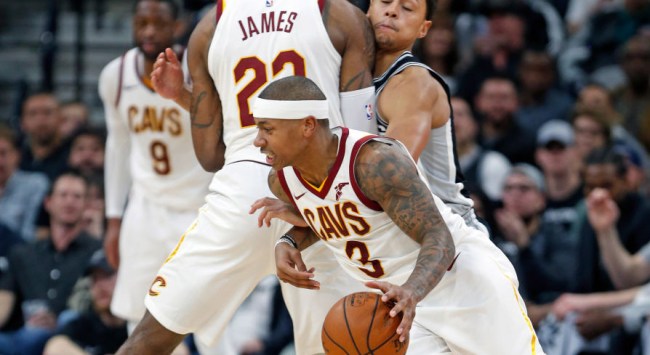 It’s tough to think of an athlete who has had a steeper, more expedient fall from grace than Isaiah Thomas. We are just one season removed from the feisty 5’9” point guard igniting Boston’s fanbase and instilling it with boundless hope that hadn’t been present since the Big 3 era. Thomas set the Celtics franchise record with 43 straight games with 20+ points, breaking John Havlicek’s record set in 1972 en route to his second straight All-Star season.

His historic season wasn’t rewarded by the Celtics organization, as he was traded to the Cavs in August of 2017 to acquire Kyrie Irving. After 15 uninspired games with the Cavs, he was shipped to the Lakers for a bag of peanuts, where he was sidelined weeks later to undergo arthroscopic surgery on his right hip.

Hopefully the 29-year-old’s best days aren’t behind him and he can fix that pesky hip so he can return to 2016-17 Isaiah.

But for now, he’s trolling LeBron and the Cavs by pleading for a ring if they win the NBA Finals. Mind you, Isaiah played 15 games for the Cavs and averaged the fewest points (14.7) since the ’12-’13 season.

As The Ringer points out, In an Instagram Live feed last night, Thomas says, “If the Cavs win, I need my ring. Bron, if the Cavs win, send me my shit. And my suits! I haven’t got none of my suits that I got fitted for. … Can you tell them to send me my suits? There was about five of them.”

Does IT deserve a ring if the Cavs win the #NBAFinals? pic.twitter.com/dj0TZKa4WY

Isaiah has mentioned these tailored suits before, and is referring to the matching gray suits LeBron purchased for the Cavaliers to wear during road playoff games.

But Isaiah asking for a ring isn’t the most outrageous ask, as the Warriors gave Anderson Varejao a ring after he played 14 games.

Isaiah is ALL IN:

Isaiah Thomas deserves a ring just as much as 80% of the Cavs roster of walking corpses. I need him to get one.