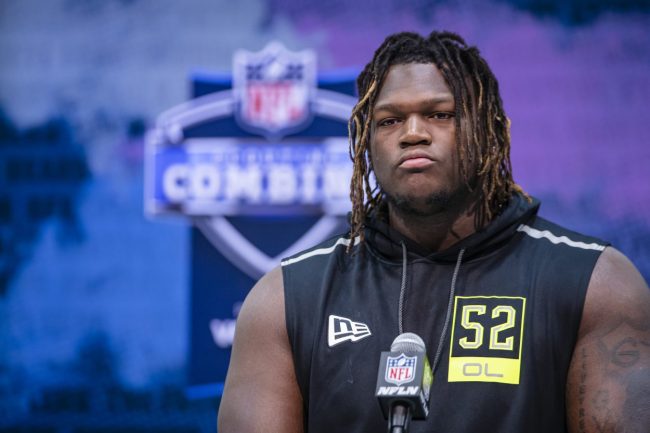 The Isaiah Wilson era in New York is officially over.

Three months after the Giants signed the troubled offensive tackle, he was released on Tuesday. As a result, it is hard to imagine Wilson working his way back into the league.

The former No. 29 overall NFL Draft pick has had a chaotic two seasons in the league.

Here is the timeline:

Things got started in April, 2020 when Wilson’s mother forcibly removed his girlfriend off of him during the NFL Draft. He was selected by the Titans in the first round that day.

Later that year, Wilson was suspended for a violation of team rules in Week 13. In January of 2021, during the middle of the pandemic, he was seen partying maskless on a boat over New Year’s weekend— a direct violation of NFL protocol.

Two months later, Wilson posted and deleted a tweet saying that he was done playing football for the Titans. It was reportedly in direct response to the team failing to wish him a happy birthday.

One month later, Wilson was traded to Miami. And then, only three days later, he was waived by the Dolphins for showing up late to his team physical and missing workouts to dance on top of a car shirtless.

A few days following his release, Wilson was arrested at gunpoint after a very, very high-speed car chase. The passenger he was with was found with acid.

Without a job in the NFL, Wilson proceeded to release a rap song. It was awful.

Despite all of his off-field issues, Wilson can play.

He started all but one game in his last two years at Georgia and was a physical freak at 6-foot-6, 350 pounds. As a result, the Giants gave him a chance.

Wilson signed to New York’s practice squad in September. He did not see any time on the active roster this season and was cut on Tuesday.

Per reports, Wilson’s conduct was again the reason for his release. He could not stay awake in team meetings.

And … Isaiah Wilson released from the practice squad. Rob Sale’s “no comment” and then “be dependable” last week on Wilson foreshadowed this.

The Giants took a crack at the troubled former first-round pick, but I heard he was falling asleep in meetings with regularity. No good

Now, less than two full years into his NFL career, Wilson has been either cut or traded by three different organizations. It would be hard to imagine him getting another opportunity soon, but with his talent, it is not out of the picture.