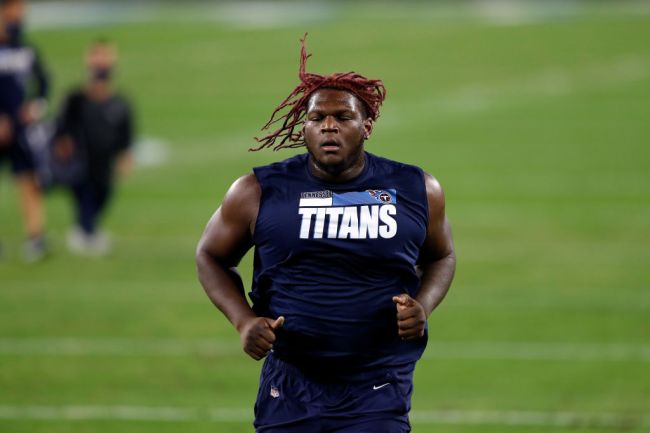 More troubling news has emerged regarding Isaiah Wilson, who is cementing himself as one of the biggest NFL Draft busts in league history. Two months before the Titans traded him to the Dolphins, who cut him just a few days after acquiring him, Wilson was arrested at gunpoint after a high-speed car chase and was charged with multiple offenses, according to the Barrow County (GA) Sheriff’s Department.

As first reported by Broadway Sports, early in the morning of January 7, three days before the Titans Wild Card game against the Ravens, Wilson was arrested just outside of Athens, GA. The former Georgia Bulldog was booked and charged with the following: fleeing or attempting to elude a police officer for a felony offense; speeding in a construction zone; reckless driving; marijuana possession of less than one ounce; possession and use of drug-related objects; and reckless conduct, according to the Sheriff’s Department.

According to the report, a representative for the Barrow County District Attorney’s office said the court’s scheduling details aren’t shared with outside parties, which is why we may just be hearing of this arrest three months after the fact.

The Sheriff’s Department’s incident report revealed that an officer saw Wilson’s Dodge Charger speed past his car, he flipped on his radar and clocked Wilson going 123 mph. The officer eventually caught up to the Charger, but it then began to speed away as the chase had reached 140 mph at that point.

Per the report, the officer was advised via radio to end the pursuit given the high-rates of speed, but just moments after it was called off, an undercover ICE agent had witnessed the car crash off the road and was holding the driver at gunpoint.

Wilson, and a female later identified as Grace Barnett, were standing through the sunroof of the car before being handcuffed. According to the report, Wilson said “that he had past experiences with law enforcement recently and was scared,” when asked why he sped up after the officer’s car caught up to him.

Wilson and Barnett were arrested and taken to Barrow County Detention Center for booking where 0.2 grams of acid were reportedly found inside Barnett’s purse.

This is just the latest development that has turned into a sad and troubling saga for Wilson.

In August, Wilson was given a trespassing warning by Tennessee State University police during a party near the Nashville campus. In September, he was charged with DUI after he crashed his car into a concrete wall in Nashville. After being suspended and bouncing on and off the reserve/non-football illness list throughout the season, Wilson ultimately played four snaps for the Titans as a rookie.

Tennessee dealt Wilson to Miami in exchange for a 2022 seventh-round pick on March 17, but after videos surfaced of him dancing on top of cars while skipping team activities, the Dolphins cut him three days later on March 20.