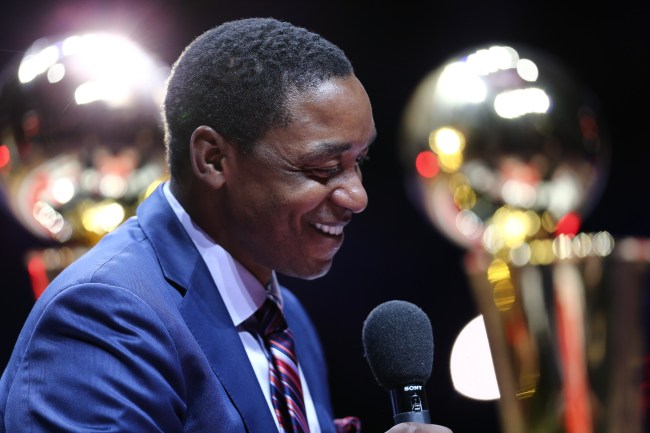 Isiah Thomas is a two-time NBA champion and a member of the Basketball Hall of Fame, so he knows a little bit about playing the game. While Thomas had some unsuccessful days as a head coach and front-office exec since retiring, he still has plenty of wisdom when it comes to today’s players.

Joining ESPN’s Get Up! today, Isiah Thomas was asked his opinion on the rumors that Kyrie Irving and Kevin Durant, who are both free-agents this summer, could be joining forces on the same team. Although Thomas praised both individually, the former Detroit Pistons great said that he doesn’t think the two could coexist on the same team, citing the fact that both are too ball-dominant. Take a look at the full quote from Isiah Thomas below.

“I don’t see these two being a good fit because they have the same skill set,” Thomas said. “I mean, Kyrie and Kevin Durant — they’re both ball-dominant. What makes Kevin Durant so effective in Golden State is that Klay (Thompson) plays off the ball and Steph (Curry) plays off the ball. The two point guards for Golden State is Kevin Durant and Draymond Green. Those are the main ball handlers. When you look at Kyrie Irving, he’s a ball-dominant guard. He wants to handle the basketball. The thing that made him not like Cleveland as much is that LeBron James was ball-dominant also and Kyrie said he wanted his own team. Now you put Kyrie and Durant together, which one of them is going to be the ball-dominant person and which one is going to play off the ball?

Isiah Thomas brings up a good point, as both Durant and Irving want the ball in their hands to create for themselves or teammates, which is part of the reasons why they’re superstars in the league, because of their vision and basketball IQ. The hoops Hall of Famer compared the two current stars to himself and Magic Johnson back in the day, giving an example as to why he and the former Los Angeles Lakers star wouldn’t have coexisted either.

We’ve seen other NBA superstars take on a lesser role and hand over responsibilities to All-Star teammates to be successful — like Durant’s current Golden State Warriors teammate Stephen Curry, who did so when KD joined the Dubs in 2016 — but it doesn’t always work as well. Isiah Thomas might be giving something for both Kevin Durant and Kyrie Irving to think about with this, so it’ll be interesting to see what the All-Stars do come this summer.