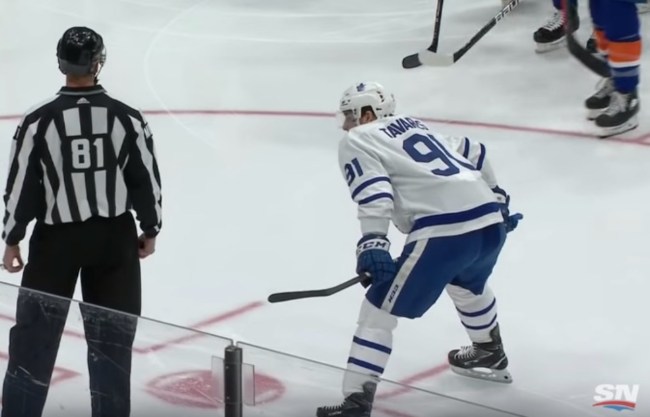 Last night’s slate of NHL games saw two matchups between potential Eastern Conference Finals contenders and, unfortunately, both games turned out to be total disappointments. Up in Boston, my #1 Tampa Bay Lightning who could break a ton of records by the end of the season squared off against the Bruins.

Tampa was playing their third game in four days and the entire team looked like so slow it seemed like someone forgot to sharpen their skates. If it wasn’t for backup goalie Louis Domingue the Lightning could’ve lost 10-1 last night but they made it out of Boston losing to the Bruins 4-1 and the Bruins looked absolutely electric at home.

Out on Long Island, #3 Atlantic seed Toronto faced off against the Islanders who are #1 in the Metropolitan division. The two teams are nearly even in points, Toronto has 82 (+44 goal differential) and the Islanders have 81 points (+35 goal differential). But the biggest story of the night was John Tavares taking the ice in Long Island for the first time after leaving the team to sign with Toronto. The Maple Leafs got destroyed 6-1 last night on the road.

Tavares was drafted #1 overall in the 2009 NHL Draft by the New York Islanders. He was born and raised in Mississauga, Ontario, a suburb of Toronto and he’s been a lifelong fan of the Maple Leafs. This offseason, Tavares signed a 7-year contract with the Leafs worth $77,000,000 which had a signing bonus of $70,890,000.

The man got PAID. And he’s an example of the rare superstar athlete who grows up and gets to play for his hometown team. Islanders fans will forever be salty about this and they have reason to be given that Tavares was very close to re-signing with Long Island and remaining with the Islanders.

Tavares was greeted by a hostile crowd last night with 14,000 fans booing him, chanting ‘asshole’, and someone even threw a fake snake at him on the ice during warmups. Here’s that surreal footage:

Here’s someone throwing that snake at him in very poor form:

John Tavares gets plastic snakes thrown at him in his return to New York pic.twitter.com/HKKHVskZ79

If Islanders fans would be real for a second they’d realize he was ALWAYS going to end up in Toronto:

Not everyday you can live a childhood dream pic.twitter.com/YUTKdfMALl

Tavares will never receive a warm welcome in Long Island for the rest of his career but I’m sure that doesn’t bother him whatsoever. You wouldn’t see his former teammates or coaching staff treating him like the fans do.

It is interesting how the Islanders already have 81 points on the season with over a month left and they finished last season with only 80 points. With Tavares on the roster this season the Islanders could easily be at 90 points by now if not more. Still, the Isles are leading their division and the fans have no reason to complain. They also demolished Toronto last night 6-1 on their home ice which has to feel great.