The Ja Morant, Derrick Rose Debate Has Taken Off Following Another Big Night And It’s Dividing Everyone On Twitter 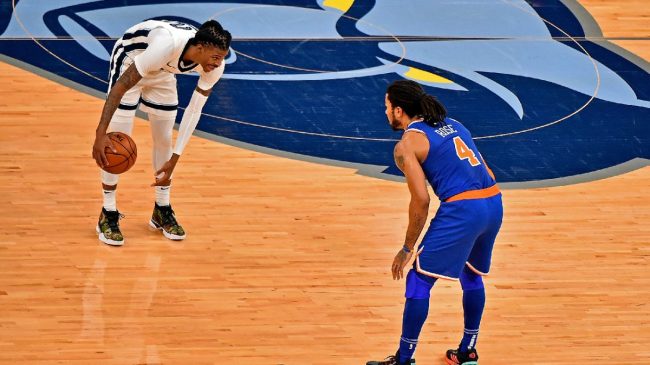 Ja Morant has developed into one of the NBA’s brightest young stars. In just his third season, Morant is averaging nearly 27 points a game on 49% shooting while dishing out 6.8 assists per night.

He’s easily lived up to the hype as the No. 2 overall draft pick in the 2019 selection process, and there’s a clear argument to be made that he should’ve been chosen over top pick Zion Williamson.

In just his last two games alone, the point guard has set and broken franchise records for most points scored in a game. First was a 46-point performance against the Bulls on Saturday, which was a Grizzlies’ franchise high. He followed it up with an incredible 52-point night on Monday to break his own mark.

Morant was unconscious from the floor, hitting on 22 of his 30 attempts. He also had a posterizing slam dunk over Spurs center Jakob Poeltl that’s sure to be shown on NBA highlight reels for years to come. The performance even landed Morant a shoutout from one of the game’s all-time great point guards, Allen Iverson.

Now, Morant is being compared to another MVP winning PG, with folks debating whether or not his third season has been more impressive than that of Derrick Rose’s 2010-11 campaign.

Rose won the league’s Most Valuable Player honor that year, averaging 25 points a game to lead the Bulls to a 62-win season. The former Memphis Tigers star was the same age as Morant at the time and had completely taken the NBA over in year three.

Rose was the youngest NBA MVP in league history at just 22-years old. This was prime D Rose, prior to his career-altering injuries that followed.

There’s a clear debate to be had.

Both players’ stat lines are similar. Morant leads in scoring while Rose paces the way in assists.

Rose led the Bulls to the top seed in the East but was upended in the Conference Finals by Super Team Miami which boasted the talents of LeBron James, Dwyane Wade, and Chris Bosh.

Morant has the Grizzlies sitting in third place in the West, just one game back of the second-placed Warriors. They’ve already matched their 38 wins posted a season ago and look primed to make some noise come playoff time.

The debate has grown heated on social media, particularly with the two stars having ties to the Memphis area. Take a look at the Twitter reaction below.

Ya’ll really forgot and it’s sad. Ya’ll just comparing stats but D.Rose led the Bulls to back to back 1 seeds and won MVP in Bron’s prime with the Heat. https://t.co/jcCxFoQpyT

That man on the left won mvp at 22 in a league with Kobe Lebron Kd Melo Dirk and Dwight stop it https://t.co/Wv5gv6J0Df

ja gotta bring his squad to the conference finals, then we can talk https://t.co/LucTnWP04W

Drag me idc. Give me Ja https://t.co/ALqgdkmcTw

Will this be a sign that Ja Morant's MVP year??? @JaMorant #basketball #NBA https://t.co/k9dtpyENs6 pic.twitter.com/PtXDVPGAlJ