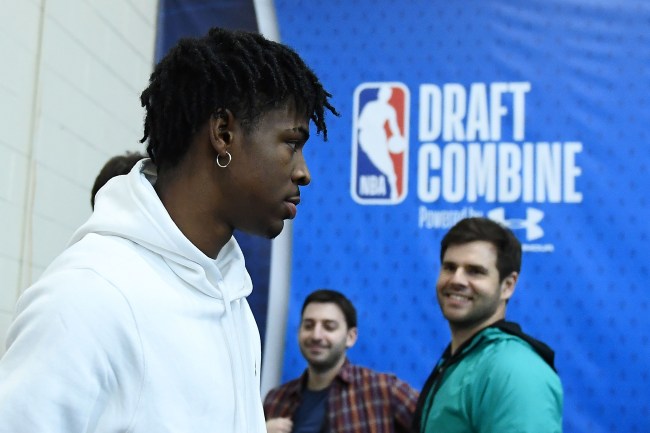 Ja Morant is expected to be a top-3 pick in this year’s NBA Draft, and, for anyone who watched the point guard play in this year’s NCAA Tournament, you know that the kid has some serious skills, as he put up a triple-double in his Murray State team’s first game against Marquette, leading them to an upset bid. It’s those skills that have so many scouts drooling about the possibility of Morant becoming an absolute superstar once he reaches the next level — and why the kid is extremely confident in himself with what he can do on the basketball court.

Just how skilled does Ja Morant think he is right now? Well, when talking to Bleacher Report’s Taylor Rooks on her show “Take it There,” the soon-to-be rookie had one simple question that put that really showed his confidence. That’s because, when asked by Rooks who his starting five of current NBA players would be, Ja Morant didn’t just add himself alongside guys like Paul George, Kevin Durant, Giannis Antetokounmpo and Anthony Davis — which is a lethal team — but he left off LeBron James because he feels like he should be the distributor for his dream team. Take a look below.

KD or Bron at the 3? @igotgame_12 names his dream starting lineup 👀

Ja Morant on calling himself “Point God,” modeling his game after Russ and playing with Zion in AAU on a new “Take It There” with @TaylorRooks https://t.co/OcnUeQNcDv pic.twitter.com/HW6q95ffcm

You’ve got to hand it to Ja Morant, he doesn’t lack belief in himself, even if that does mean leaving off, arguably, the greatest basketball player on the planet and, quite possibly, ever to play the game. And, hey, while LeBron James might have three titles, four league MVPs and a legacy like most athletes could only dream of, Morant thinks that, for his dream team of current NBA stars, there isn’t anyone better to run the show than himself — and that’s pretty awesome for a kid his age to believe, so here’s to hoping he lives up to his own hype once he reaches the NBA.