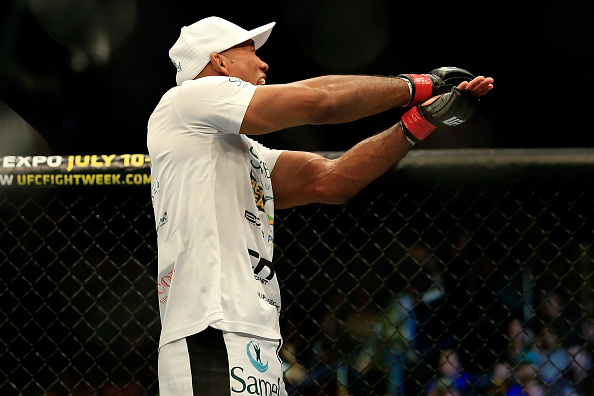 Top UFC middleweights Ronaldo “Jacare” Souza and Chris Weidman went all out in their fight at UFC 230. Despite the fact that he suffered what appeared to be a broken nose early on in the fight Jacare was able to pull off the knock out win in the third round with this vicious walk-off KO.

Update: Jacare said his nose not broken during the postfight interview.

Jacare says his nose is not broken. He says he was born on the wrong side of the track and his nose isn't broke.

He also credits Weidman for being a hero and feels bad that he had to beat him in front of his hometown crowd.

Jacare was praised for not wanting to hit a stunned Weidman while he was down.

OMG. Jacare Souza by KO in the third. Weidman devastated by a punch, was reaching for Jacare's leg but completely out of it. Two absolutely heartbreaking losses in Madison Square Garden for Chris Weidman. Massive win for Jacare, who may finally get his title shot.

Good on Jacare for stopping the fight. What a fucking fight. Amazing performance by Jacare and Weidman! #UFC230

Weidman ruined himself in that fight. Was in better shape, broke his foe's nose, went away from jabbing and combo punching, got drilled by a dude with nothing to lose and got stopped late. Heartbreaking but apropos. Also, Jacare's gentlemanly appeal to Miragliotta was savage.

But how the fuck isn't the ref stopping that?????? Lucky Jacare is a nice guy 😏 #UFC230 pic.twitter.com/Gk9YqLlGqT

Ref needs to be suspended, that was fucking ridiculous. How could he not see Weidman was clearly KTFO? Great win for Jacare and I think its the end of Weidman as a serious contender. #UFC230