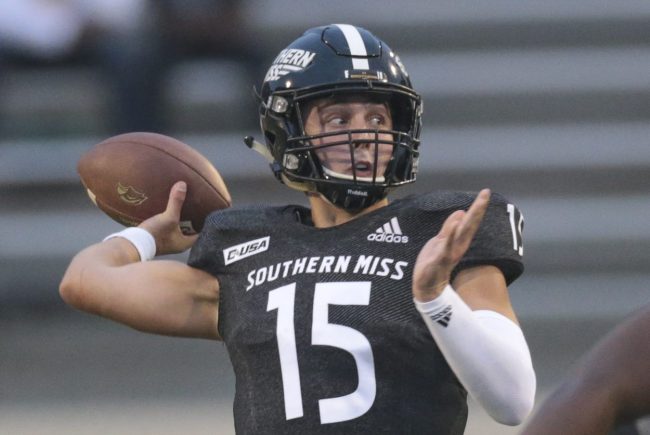 Jack Abraham is essentially the Van Wilder of college football. The Mississippi-native graduated high school in 2016 and is somehow still playing on the NCAA level.

Abraham, a 6-foot-0, 200-pound quarterback, was a three-star prospect out of Oxford High School in Mississippi. While there, one of his teammates was D.K. Metcalf, who is entering the final year of his rookie contract with the Seattle Seahawks.

Meanwhile, Jack Abraham is headed to his fifth school in seven years after committing to Missouri on Monday.

COMMITTED. Ready to get to work #MIZ 🐯 pic.twitter.com/wqFNiHIyOA

After high school, Abraham began his career at Louisiana Tech. He redshirted as a freshman and then transferred to Northwest Mississippi Community College.

While at Northwest, he threw for 2,949 yards and 23 touchdowns in 2017. He then transferred to Southern Miss and started throughout the majority of his three years with the program.

With the Mustard Buzzards, Abraham threw for 41 total touchdowns and threw for 3,496 yards in 2019.

He also has some wheels.

Jack Abraham is showing the @SouthernMissFB receivers that he's got some speed too! pic.twitter.com/cgzCMG5nIh

Injuries hindered his time in Hattiesburg in 2020 and after the season, he entered the transfer portal. With hopes of competing against Will Rogers for the starting spot in Mike Leach’s offense, Abraham transferred to Mississippi State for 2021.

However, because of injuries, he did not get to play last season. But he is getting that year back.

Abraham was granted a medical hardship waiver by the NCAA, giving him a seventh year of college football in 2022.

He entered the transfer portal back in January and took a few different visits around the country. Initially, the thought was that Abraham could serve as a valuable back-up at a Power Five program.

As a result, Abraham had applied back home at Ole Miss and was expected to walk-on with the team for the upcoming season. That meant that, by the time he finally graduated and moved on from college football, he would have played for all three major in-state institutions.

However, the Rebels received a transfer commitment from Jaxson Dart and Abraham kept his options open. A few months later, he was officially cleared to return to the gridiron for year seven.

And then it was reported that Abraham was going to travel to Missouri over this past weekend, which he did. While there, he must have liked what he saw and heard, because he committed to the Tigers on Monday.

As things currently stand, Mizzou doesn’t have a starting quarterback in stone for 2022 and head coach Eli Drinkwitz was seeking a transfer. Perhaps that is the plan for Abraham, who could certainly win the starting job for this fall.