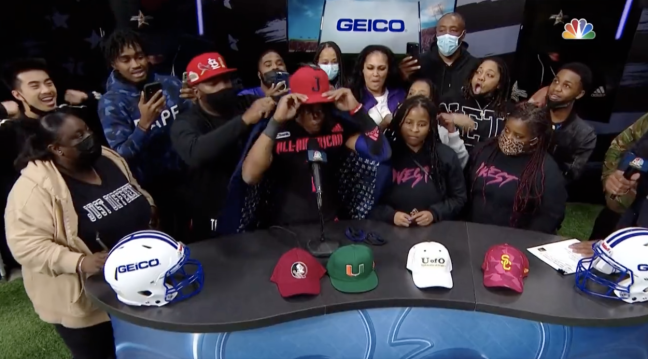 There were multiple college football teams that played in a New Year’s Six Bowl game and did not receive a commitment from the No. 1 player their respective state. After Missouri’s top-ranked player Kevin Coleman committed to play for Deion Sanders, Jackson State now has two.

Coleman, a four-star wide receiver from St. Mary’s High School, stands 5-foot-11, 170 pounds. He is the fourth-ranked receiver in the country, per 247Sports, and made a huge splash on Saturday.

Entering the weekend, Coleman was believed to be down to two schools— Florida State and Miami. He was scheduled to commit on live T.V. during the U.S. Army All-American Bowl and the Hurricanes felt good about where they stood prior to the game.

NBC, knowingly or not, saved the biggest announcement for last. As the clock wound down in the fourth quarter, Coleman stood with his family in front of five hats.

He was down to Oregon, USC, Miami, Florida State and Jackson State.

After being asked where he will be playing his college football, Coleman thanked God, his family, his friends, and every school that recruited him. Standard stuff.

What came next was anything but. To Coleman’s right, his family member (maybe dad?) reached down to grab something from below the table.

After shuffling for a moment, the man pulled out a blue suit jacket with a pocket square and placed it over Coleman’s pads as he picked up the JSU hat and committed to play for Deion Sanders. In typical Primetime fashion, Coleman announced his commitment in style.

Kevin Coleman, the number 4 WR in the nation, is going to Jackson State to play for @DeionSanders! #BleedTheeBlue | @AABonNBC pic.twitter.com/hgPGRNJrHE

It was a huge shock to everybody. Miami was considered all-but a lock, Florida State was heavily in the mix, and Jackson State was never even mentioned.

And yet, Coleman is headed to Mississippi.

When asked why he decided to play for Jackson State, Coleman made his reason very clear.

“Primetime, why not play with the best?”

Coleman made history with his decision. He became the first-ever recruit to commit to Jackson State during the All-American Bowl.

He also became the second recruit in the Class of 2022 to shock the world by picking the Tigers. The nation’s No. 1 overall recruit, Travis Hunter, committed to Jackson State on Early Signing Day.

Florida State was considered a heavy favorite to land Hunter and Coleman until late in the process.

In Hunter’s case, everybody in Tallahassee and around the country thought it was a done deal. In Coleman’s case, the Seminoles got jumped by the Hurricanes in the final weeks before they both got got by JSU.

Coleman spoke with 247Sports’ Tom Loy after his commitment and said that Hunter’s decision played a big role in his decision.

“All my life what everyone call me is just different,” Coleman told 247Sports Tom Loy on the field. “I had to be different. Travis Hunter is one of my best friends. When he made that move I been wanting to make that move. When he made that move I couldn’t leave him alone. I feel like he the best DB and I’m the best receiver. I want that relationship to stay tight, I want us to grow together, I wants us to compete every day against each other.

As for what Jackson State is getting in Coleman, the Tigers’ offense gained a huge weapon.

Considered the No. 1 slot receiver in the nation, Coleman gained over 1,000 yards receiving on less than 50 catches and scored 18 total touchdowns.

That's one way to describe Kevin Coleman Jr. (@KevinLamarCole1) who helped his team clinch a spot in the state championship game.

Watch his highlights from the first half, stay for his message at the end. @StMarysHSSports pic.twitter.com/cXcFljIPnh

Leading up to the All-American Bowl, Coleman was absolutely dominating some of the best high school corners.

He was also making some ridiculous toe-drag catches.

Coleman then did the same during the game. Look at this route.

Miami🟠🟢WR target Kevin Coleman with the beautiful route and catch in the UA All America Game. #CanesFootball pic.twitter.com/a7pskik6oZ

And look at the effort to stay in-bounds.

Incredible accuracy by Klubnik and a phenomenal catch by Kevin Coleman.#AllAmericanBowl pic.twitter.com/SnpMkvM5id

Needless to say, Coleman is an incredible talent and Coach Prime landed a big one.