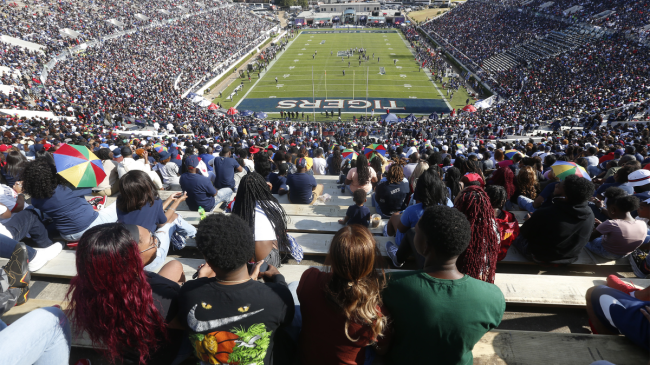 The Jackson State Tigers have a huge matchup awaiting them against HBCU rival Southern. The two schools will meet on Saturday for the 68th time in the storied rivalry, with the Jaguars leading the all-time series by a 35-30 advantage (two Jackson State wins have been vacated).

The rivalry will be put on a national stage this weekend as College Gameday has announced it will be in attendance for the “Boombox Classic,” a huge win for HBCU and FCS programs nationwide. That ESPN visit has cranked up the anticipation even more amongst fans and alumni from the universities, meaning tickets could be hard to come by.

Due to that high demand, the Tigers’ athletic department posted an announcement on social media regarding the ticket policy ahead of Saturday’s game. The unusual notification has opposing fans upset.

Jackson State will not honor tickets sold through third-party companies.

This is something that the athletic department has reportedly done throughout the season but opposing fans may not have been familiar with Jackson State’s ticket purchasing policy. For those that already bought tickets through those third-party sellers, it means access to the game could be denied.

Fans online are not happy about the announcement, most notably the Southern supporters who were looking to make the trip to Jackson for the gameday festivities. Take a look at what they had to say on social media.

One fan wrote, “So Jackson State’s being petty,” after seeing the ticket policy. Another Southern fan commented, “Spread the word since Jackson State waited until the 11th hour.”

Many others shared the same sentiment.

everytime they play us out ther they pull a stunt … everytime bruh. that’s why we stoped playing them out there every year. https://t.co/zxD3XMCqF0

Hopefully those that have already bought tickets will be able to get a refund or exchange. If not, there will be a lot of unhappy patrons in Jackson this weekend.