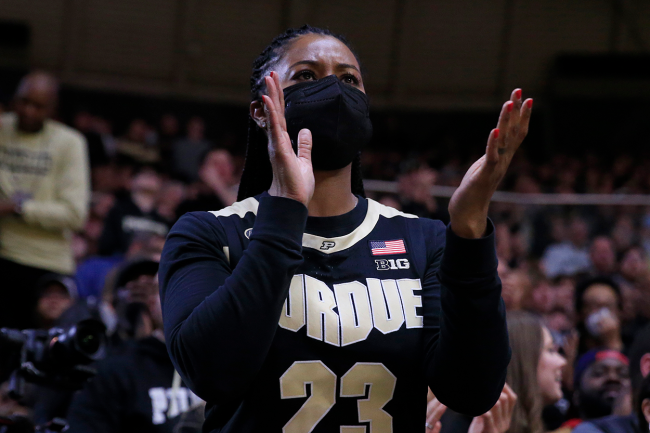 Niele Ivey has two important Sweet Sixteen matchups in her life this weekend. Not only is Notre Dame women’s basketball set to play a No. 1 seed on Saturday, but her son is playing for the Purdue men’s team on Friday.

As a result, Niele Ivey’s weekend is going to be crazy.

Niele is the head coach of the Fighting Irish, who will take on 1-seed N.C. State on Saturday. Less than 24 hours prior to her team’s biggest game of the season, her son, Jaden Ivey, will play the biggest game of his season as Purdue faces 15-seed Saint Peter’s.

Niele Ivey will be at both Notre Dame and Purdue’s Sweet Sixteen games.

On Friday morning, Niele will game plan for her own Sweet Sixteen game in Bridgeport, Connecticut. At 12:25pm ET, she will take part in a press conference. At 1:10pm ET, she will coach her team through the most important practice of her career.

As soon as she breaks the post-practice huddle, Niele will hit the road and drive over to Philadelphia, Pennsylvania to watch Jaden take on this year’s Cinderella team at 7:09pm ET. After the game ends, she will get back in the car, return to Connecticut and try to get some sleep before waking up for her own game day.

It is about a six-hour round trip in total. If the Purdue game ends on time, Niele can be on her way back to the Nutmeg State by about 10:00pm ET. That puts her back to her hotel around 1:00am ET on Saturday.

Notre Dame will take on the Wolfpack at 11:30am ET on Saturday.

Niele could not be at Jaden’s first two NCAA Tournament games because he was playing in Milwaukee while she and Notre Dame were playing in Oklahoma. It just wasn’t possible.

Now that it is doable, Niele was not going to miss the chance to see her son play. She will drive herself and refuses to fly or take a train because she wants to be in control of what happens.

Should the Irish and Boilermakers both win their respective games, the travel arrangements, if possible, will be chaotic. Either way, they both have to take care of their respective Sweet Sixteen opponents first.