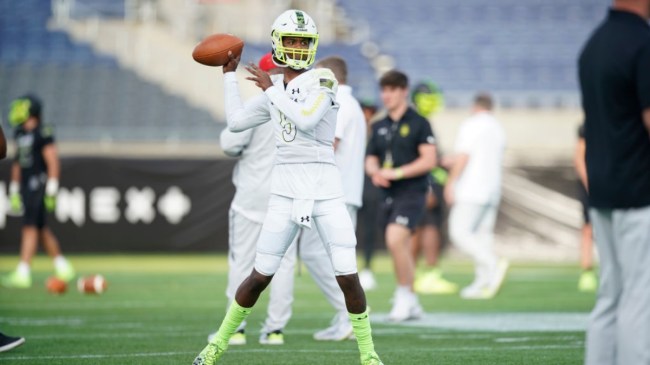 There have been some big commitment changes throughout college football during this year’s signing period.

5-star safety Peyton Bowen surprisingly flipped from Notre Dame to Oregon only to then flip from Oregon to Oklahoma.

The top corner in the Class of 2023 just flipped from Miami to Colorado.

Rashada actually signed a letter of intent to play for Florida.

However, he eventually decided to request his release from that LOI because Florida failed to come through with an NIL deal that he had been promised during his recruitment.

He was granted that release and now is back to taking visits with programs to figure out where he will actually end up next season.

This weekend, he is on a visit to Arizona State.

According to ESPN’s Pete Thamel, Rashada now has a visit lined up with a team that played in this season’s College Football Playoff.

Rashada will be meeting with the TCU Horned Frogs next weekend.

Source: Former Florida QB committ Jaden Rashada plans to visit TCU next weekend. The Top 30 recruit is on a visit to Arizona State this weekend. Florida granted him a release from his National Letter of Intent earlier this week.

Either one of these teams could be promising options for Rashada.

Both have QBs on their roster that would be starting over Rashada in year 1. TCU has Chandler Morris returning after he was expected to be the team’s starter last season before Max Duggan’s breakout campaign.

However, he is already a junior, so TCU will likely be ready for a new QB in a year.

It’s the same story in Tempe as Arizona State just brought in Drew Pyne as a transfer after he helped Notre Dame recover from an 0-2 start this season.

He’ll be expected to start in 2023, but is a junior, leaving the door open for Rashada in his sophomore season.

Rashada is sure to have plenty of options with how quickly he’s been able to get visits with Power 5 teams around the country.