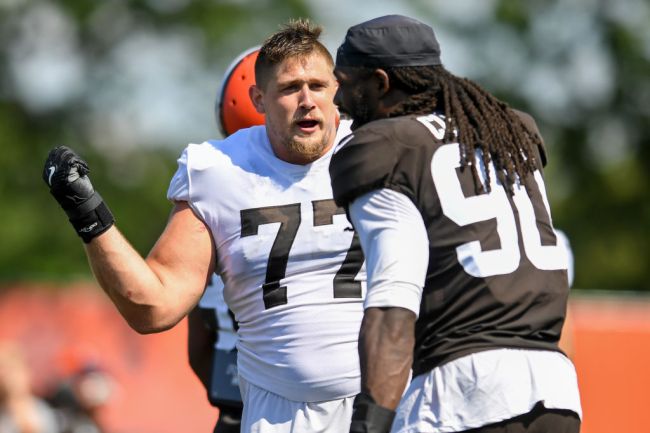 When Jadeveon Clowney signed with the Cleveland Browns during the offseason, it made for a terrifying defensive line. The team now has two No. 1 overall picks in the trenches and is going to get creative in how it uses them both.

Clowney, who signed a one-year $8 million deal, recently indicated that he and Myles Garret will be lining up on the same side of the line more often than we might expect. Both players are considered EDGE rushers and rarely lineup on the interior.

However, according to Nate Ulrich of the Akron Beacon Journal, that is about to change.

Cleveland defensive coordinator Joe Woods is keen on the idea of lining up both Garrett and Clowney on the same side of the line. To properly execute the moonlighting strategy, one of the two will have to set up over the guard.

Clowney is up for the job and decided to fire completely unwarranted shots at the Big Uglies.

When talking about the new defensive strategy, he went off on offensive guards for absolutely no reason.

“We love that matchup,” Clowney said. “We feel like they’re the unathletic guys. That guard position, they’re not real athletes down there. So they’re just physical and maulers.”

The 6-foot-5, 28-year-old defensive menace is salivating at the idea of lining up across from a guard and decided to lay in on the position group.

Although he isn’t lined up on the interior in this instance, here is a reminder of what Clowney can do with an inside path to the quarterback.

Considering that his shots were fired completely unnecessarily, one has to wonder how Browns guards Joel Bitonio and Wyatt Teller feel about their new teammates comments. How rude!