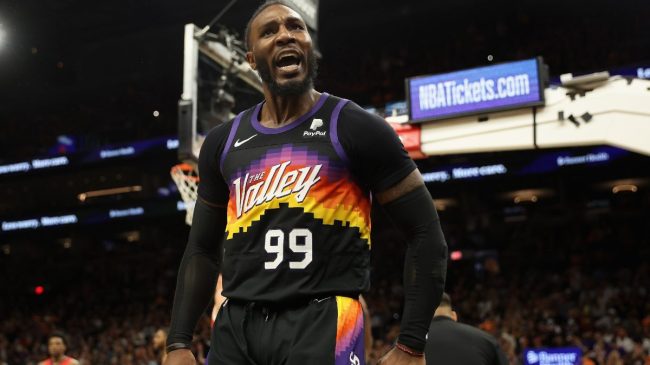 The series between the Suns and Pelicans has been heated thus far.

Not only are the two teams tied at two wins apiece, but the animosity on the floor has been evident. Things have begun to reach a tipping point with this latest trip to New Orleans.

In Game 3, we saw Pelicans forward Jaxson Hayes absolutely steam roll Jae Crowder in what would wind up earning him a flagrant foul. While attempting to rebound a missed shot, Hayes sees Crowder in his path and lowers a shoulder to force the Suns big man to the ground.

He unleashed some frustration with this bulldozing hit.

Jaxson Hayes has been ejected after getting a flagrant 2 for this foul on Jae Crowder. This play was deemed unnecessary and excessive. pic.twitter.com/nDsu9tWvnJ

The play, which was deemed “unnecessary and excessive,” landed an ejection for Hayes.

Crowder attempted to go after the forward, but the situation was quickly diffused.

It’s not the first time we’ve seen Crowder get into a tussle with an opposing player. Prior to the start of the playoffs, he got into it with Warriors’ forward Draymond Green. The verbal altercation would continue after the end of the game, with the two players being separated at midcourt.

Crowder is a scrappy player with a high motor. That motor often gets him on the wrong side of opposing fanbases. That’s just what’s happened in New Orleans.

In the middle of the Game 4 matchup between the Pelicans and Suns, the New Orleans fanbase broke into a “F Jae Crowder” chant.

The NBA media was quick to react, noting the tension that’s been building over the first few games of the series.

Per my analysis, Pelicans fans do not like Jae Crowder.

There is a very, very loud "F— Jae Crowder" chant going on here.

On a related note, after the first chant, Crowder hit his first 3-pointer of the series after missing his first 15 attempts from deep.

Jae Crowder drills his first 3-pointer of the series as a "Fuck Jae Crowder" chant rings through the arena.

That's all he needed!

Crowder and Co. will host the Pelicans on Tuesday as both teams return to Phoenix. The explicit taunting will disperse for one game, but it could be back in Game 6, particularly if the Pelicans take a 3-2 series lead.