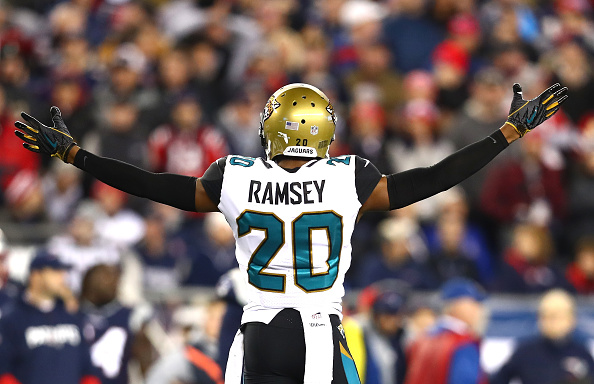 Jaguars cornerback Jalen Ramsey has some hot takes about your favorite QB in his latest interview with GQ’s Clay Skipper.

Jalen Ramsey keeps it real: "I'm just me, unapologetically. I don't really care… God didn't make me to be on this Earth by myself. Somebody gonna like me. So if a couple people don't like me, I'm not tripping. I am good." https://t.co/YD62P7v5an

While praising the Ravens for picking Lamar Jackson, Ramsey took a shot at the team’s current QB, Joe Flacco.

I would’ve picked [Lamar Jackson] earlier than 32. I think he’s gonna do a good job. Especially with the [Baltimore Ravens’] offensive coordinator—he likes running quarterbacks, likes that read option. And just being honest about it, [Joe] Flacco sucks. I played him two years in a row. He sucks.

I think Matt Ryan’s overrated. You can’t tell me you win MVP two years ago, and then last year, you a complete bust, and you still got Julio Jones? There’s no way that should ever happen. I don’t care. You know what that tells me? That tells me [Offensive Coordinator Kyle] Shanahan left, went to San Francisco, got Garoppolo, made Garoppolo this big thing. And now Garoppolo is a big name—and now [Matt Ryan] has this bad year? Alright, well, was it really you, or was it your coach? He was doing what was asked of him and it was making him look really, really good.

Big Ben [Roethlisberger], I think he’s decent at best… It’s not Big Ben, it’s [Antonio Brown]. Big Ben slings the ball a lot of the time. He just slings it, and his receivers go get it. He has a strong arm, but he ain’t all that. I played him twice last year, and he really disappointed me. He’ll be in the Hall of Fame and all that.

Here are the quarterbacks that don’t suck according to Ramsey.

Aaron Rodgers does not. Tom Brady doesn’t. I gotta think now, about all the teams… I think Marcus Mariota is a great quarterback for their team. I think Tyrod Taylor is actually a better quarterback than he gets credit for, because he does not make mistakes. He’s honestly a Marcus Mariota type player, where he manages a game really well, always has them at least in position to be in the game late in the game. He just doesn’t have turnovers that often. That’s really all you need, especially if you get a good defense.

Ramsey was pretty nice to his own QB Blake Bortles.

Blake do what he gotta do… I think in crunch time moments, like last year’s playoff game—not as a team, because we would have trusted him—but I think as an organization, we should have trusted him more to keep throwing it. We kinda got complacent and conservative. And I think that’s why we lost. We started running it on first and second down, throwing it on third down, every single time we were out there. [The Patriots] caught on to that.

Ramsey also believes that Colin Kaepernick is good enough to play in the league.

Yeah. Oh, hell yeah. He’s way better than some of these second string quarterbacks out here. Possibly better than some of these first string quarterbacks out here. And some teams have third string quarterbacks. He’s definitely good enough to be in the league, but he won’t be. Sadly… Because if somebody does pick him, and they just stay in the locker room—I think it’s like a pride thing now. It’s kind of like, “If all of a sudden we pick him up now, people might be like, so why didn’t we pick him up last year? Now we gonna pick him because he has the opportunity to stay in the locker room?” It’ll reflect bad on teams if they pick him up now. So I don’t think he’ll get picked up.

You read more the rest of Jalen Ramsey’s interview over at GQ.com