Jags’ Myles Jack Gets Ejected For Punching Chiefs Player In The Face, Had To Be Dragged Off The Field Because He Didn’t Want To Leave Game 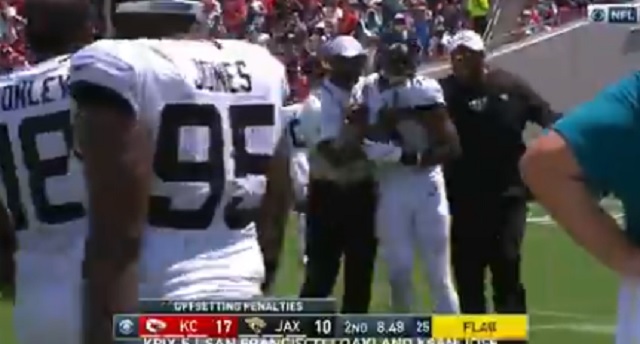 Football is back and we already have our first ejection of the season.

In the second quarter of today’s Chiefs-Jags game, Jags linebacker Myles Jack was thrown out of the game for throwing punching Chiefs’ Demarcus Robinson in the face after getting tangled up with Sammy Watkins in the end zone.

Craziness in Jacksonville: #Jaguars LB Myles Jack has been ejected for hitting an opponent in the face… meanwhile, #Chiefs QB Patrick Mahomes (left foot) is back on the field.

Jack did not want to leave the game and had to be dragged off the field by team personnel.

Myles Jack goes ballistic after finding out he got ejected.

It got worse than thispic.twitter.com/FCcAdoAtCj

Myles Jack does not want to leave after being ejected pic.twitter.com/ii1le5cFOv

The Internet had some jokes about the Myles Jack situation.

Myles Jack getting ejected from the game like pic.twitter.com/l59s8MvwLS