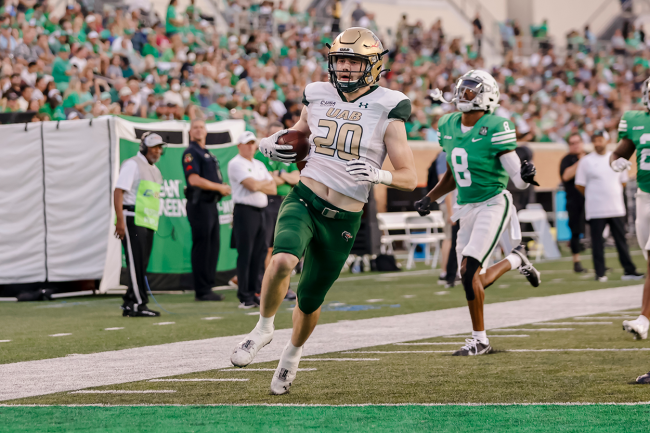 Despite an impressive career on the Group of Five level, UAB tight end Gerrit Prince did not hear his name called in the NFL Draft. However, he has since signed with the Jaguars as an undrafted free agent and is making quite the impression in training camp.

Prince, who is listed at 6-foot-5, 240 pounds, began his career as a JUCO wide receiver in Kansas. He eventually transferred to UAB, transitioned to tight end, and finished his time with the Blazers with a bang, catching 36 passes for 699 yards and 10 touchdowns in 2021.

His impressive redshirt senior season led him to receive an invitation to the East-West Shrine Bowl, where he stood out over his position-mates.

Just as I post about TEs, Gerrit Prince flashes as a receiver again. The UAB product has done this and if you're looking for more of an F type, he's attractive. pic.twitter.com/JLTtAJ2OyO

Prince is a diamond in the rough and had multiple in-person interviews and workouts with teams that were interested in his potential prior to the NFL Draft.

Ultimately, Gerrit Prince ended up in Jacksonville with the Jaguars.

Some of the things that stand out about Prince are his ability to vary the speed of his routes and keep defenders guessing, his sure hands, and his quick release off of the line. As for the the things that scouts believe he could work on, his blocking is atop the list.

Although Prince understands his role as a blocker, looks to get involved downfield, and can seal the edge on the line of scrimmage, he needs to improve. He often gets in the way more than he mauls, he has tight hips and weak base and could be quicker with his hands and extension.

While with Jacksonville at minicamp, those are some of the things he has given extra emphasis. And he seems to be doing a fine job.

Over the weekend, he proceeded to lay the biggest hit of training camp thus far. Teams haven’t brought out the shoulder pads yet, but Prince still found a way to make his mark and rocked his coach during a crossing route drill.

Whether Prince ends up sticking with the Jags or not, remember the name. He is going to find a home in the NFL and will carve out a nice career as a pass-catcher.

If he can figure out his blocking and keep laying dudes out, Prince could develop into TE1 over time.