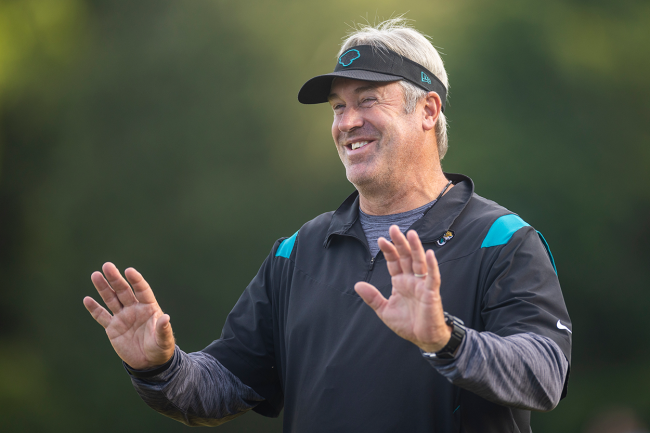 It’s a new era in Jacksonville. Urban Meyer is gone, Doug Pederson is in.

With the changing of the guard at head coach comes roster-wide changes. As the Jaguars gear up for their first preseason game of 2022 in the Hall of Fame Game against the Raiders on Thursday, the team released a depth chart.

It gives a great sense for what things could look like come Week 1, and it also makes it clear that things are very different than last year.

#Jaguars depth chart ahead of preseason Week 0 (1?) against the Las Vegas Raiders on Thursday:

Lists Hamilton as the starting nose tackle with Fatukasi as an end.

Marvin Jones and Zay Jones outside with Christian Kirk in the slot, as expected. pic.twitter.com/PgWPq02ttv

When you look at the depth chart, the amount of turnover between last year’s roster and this year’s roster is significant. Pederson is making the team his own and it comes at the expense of quite a few players who were on the team under Meyer last year but are not this year.

Take a look at how different things look:

Of the 22 positions on offense and defense, all but seven positions saw at least one player move on— whether he was cut, traded or did not resign. Four positions saw both players on the two-wide depth chart from last year not return for this year.

At the end of the day, the NFL is a business. Coaches and front office staff have to do what they have to do. Pederson wants his team to be his team— not Meyer’s — and is making the roster his own, which is totally normal. But the amount of turnover is rather astonishing.