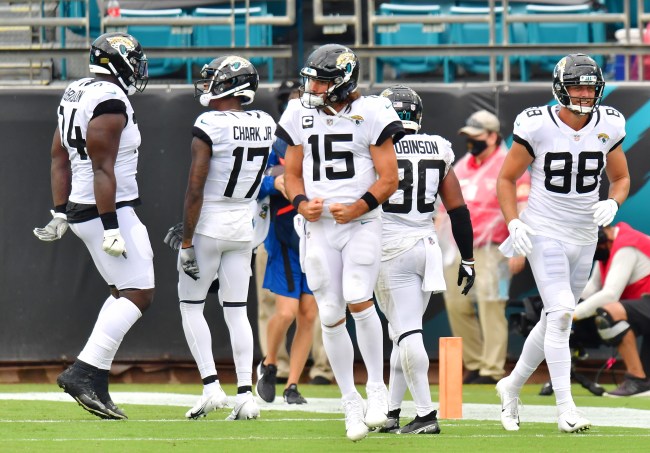 The Jacksonville Jaguars had a rough season. Sure, everybody knew coming in that things would be bad, but I’m not sure anyone thought it’d be as bad as it ended up being, with the team going a pathetic 1-15, firing their head coach and general manager, and locking up the top pick in the 2021 NFL Draft. If nothing else, at least the thought of drafting Trevor Lawrence offers some sort of reward for being so bad.

While the Jags finished with just one victory, it’s when that win came that really made NFL fans crack up on Twitter today. In the ultimate backfire, the team’s Twitter account sent the below message after starting the season 1-0 — which was a 27-20 victory over the Indianapolis Colts all the way back on September 13.

In an age when the Internet never forgets (and usually always wins), football fans made sure to clown the Jaguars for the tweet aging terribly, and reminding the franchise that, yeah, they may not have been satisfied starting 1-0, but they probably should’ve been given how the rest of the NFL season went for them. Like, this is one of those tweets that had no business ever keeping alive, and probably should’ve been deleted after 10-straight losses.

Unfortunately, that didn’t happen. Now we’ve got to take a look at some of the jokes people served the Jags in the replies months later.

Well apparently THAT was a lie lol pic.twitter.com/sApCj1ujYN

Gives off the same vibe https://t.co/bQzFvIRGfd

The prospect of drafting Lawrence sure has to make most Jags’ fans happy, as does the news that the team may be interested in hiring former Ohio State Buckeyes head coach Urban Meyer to lead the team next season. Then again, given how badly the entire organization has performed over the past couple of years, who’s to say adding those two would even right the ship? Obviously, nothing’s a guarantee… especially in the NFL.

So let this old Jaguars tweet serve as the latest reminder to be careful with what we post on social media. Whether it’s embarrassing, informative, dumb or just trying to be funny, there’s always going to be people who will dig deep to check receipts and remind you about stuff. Sadly, the Jags are the latest to fall victim here — but, somehow, it’s a fitting end to the crappy season it was for them.