Urban Meyer And Trevor Lawrence To The Jaguars? Momentum’s Building That It Could Happen 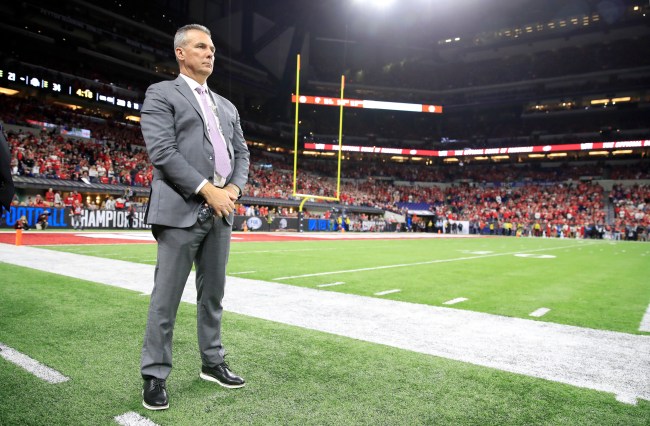 It’s been a couple years since Urban Meyer stalked the sidelines for the Ohio State Buckeyes, with the iconic head coach last leading his team to a Rose Bowl victory following the 2018 college football season. Since then, the 56-year-old has been linked to a ton of high-profile vacancies, including the USC Trojans, Texas Longhorns and even the NFL’s Cleveland Browns. While Meyer has refused to take on those gigs, there’s momentum building that he could be accepting a new head coaching role if he wants it.

According to Pro Football Talk‘s Mike Florio, Meyer is the leading candidate for the Jacksonville Jaguars vacancy, which recently open up on Monday after the team fired Doug Marrone. This is a fascinating development, with Florio even going as far as saying that the Jags’ job is Urban Meyer’s until he says no.

Persistent chatter in league circles continues to be that the Jaguars’ head-coaching job will go to Meyer, if he wants it. The question is whether he wants it.

Meyer, as PFT has confirmed, has been contacting individuals he’d potentially hire to join him in Jacksonville. He also would have the ability to hire his own General Manager, which means that Meyer would enter the NFL with full control over a team.

Yep, per reports, Urban Meyer, who has never been a head coach in the NFL, would be hiring his own general manager and be given the keys to the Jaguars franchise. We’ve seen this story play out plenty of times before in the league — and with first-time NFL coaches, it hasn’t led to much success. But if that’s what it takes to get Meyer back on the sidelines, it seems like Jacksonville’s prepared to give him the control he desires.

As Florio hints in his story, Meyer may already be calling around to see who might want to join him in Jacksonville, which sounds as if he’s at least interested in the opportunity. Then again, this is a guy who constantly seems undecided on what he really wants, with Urban leaving the Florida Gators over a decade ago to focus on his health, then leaving the Ohio State program a couple of years ago while still at the top of the sport. Maybe the Jaguars opportunity presents a the right challenge for him. Or maybe it’s just a rumor filling a vacant seat on the NFL coaching carousel.

The biggest elephant in the room then is the 2021 NFL Draft, with the Jaguars holding the No. 1 overall pick — which is presumed to be reserved for Clemson QB Trevor Lawrence. But if Urban Meyer takes the head coaching gig and builds out a front office he’s familiar with, could we see a serious shake up? Could Jacksonville actually take Justin Fields out of Ohio State given Meyer’s ties to the program? After all, Fields did just defeat Lawrence’s team in the College Football Playoff Semifinals, outplaying the Clemson quarterback.

No matter what happens, Jaguars owner Shad Kahn has vowed to turn things around, with the billionaire sending a message to all season ticket holders and sponsors on Monday promising better days ahead.

The #Jaguars just sent this out to staff, season ticket holders, and sponsors. A new beginning. pic.twitter.com/LB62jsGWNv

Kahn may be delusional after the Jaguars finished just 1-15 this NFL season, but hiring Urban Meyer could provide the necessary spark that the franchise desires. So, too, would the No. 1 overall pick. Whether it’s used on Lawrence, Fields somebody else or as draft capital to stockpile picks, somehow, the most intriguing team this NFL offseason may just be the Jacksonville Jaguars.