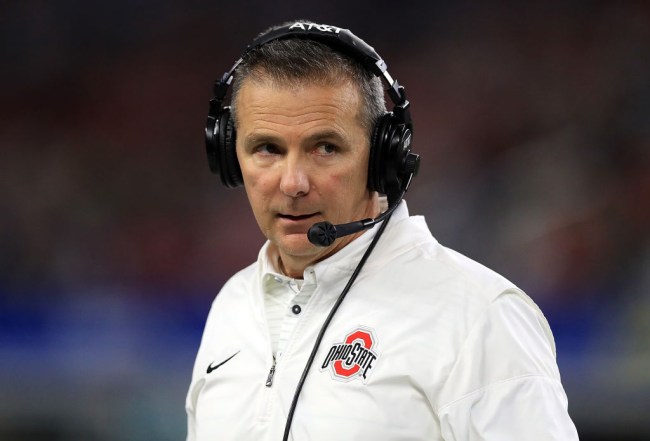 After seven years at Ohio State, an embattled Urban Meyer is reportedly stepping down at the end of the season and retiring from coaching entirely.

The Buckeyes were on the College Football Playoff bubble heading into Sunday but weren’t able to sway the committee, ultimately being named the sixth-best team in the country and earning a Rose Bowl berth against Washington on New Year’s Day.

Meyer will don the headset one last time before walking away after a year filled with multiple controversies, the most notable of which was his mishandling of domestic violence accusations leveled against former assistant coach Zach Smith.

Following that statement, there were reports Meyer said he would refuse to serve a suspension before serving a three-game suspension after it was revealed he’d deleted text messages related to the Smith situation in light of the bombshell report that led to him being disciplined.

BREAKING: Urban Meyer and AD Gene Smith suspended for the first three games of the season without pay because they "failed to take sufficient management action relating to Zach Smith’s misconduct." pic.twitter.com/UdlCpsKeTE

Meyer also had to deal with accusations that he’d turned a blind eye to players choking each other during practices while he was at the helm at Florida.

As if that wasn’t enough, Smith was also accused of hurling racial slurs at a former player while under Meyer’s supervision. However, the head coach disputed those accusations and threatened to sue the reporter who published the story.

There is some speculation the decision is health-related, as Meyer has been dealing with some issues:

Meyer has consistently expressed his wishes to continue coaching as long as his health allows. And despite a new regime and an improved way of managing the symptoms from an arachnoid cyst in his brain, the pain triggered by intensity was always likely to be too much for Meyer to handle over the long haul.

Yes. I’m sure this totally has everything to do with his health and nothing to do with the fact that he’s up to his neck in a pile of shit that threatens to suffocate him as it continues to get higher.