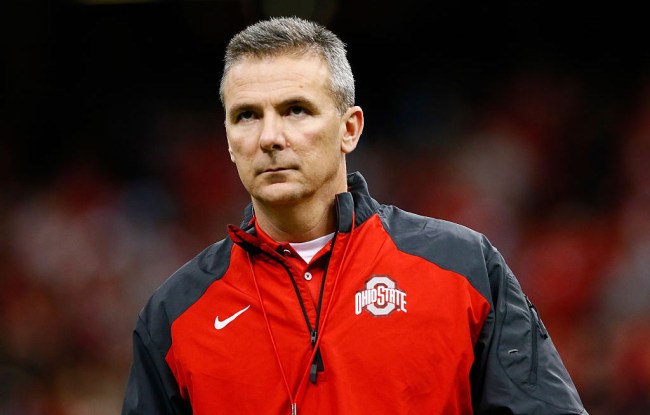 THE Ohio State Buckeyes are currently sporting a 9-1 record and are ranked tenth in the country, and in most cases, you’d think this would make their coach a pretty happy guy.

However, this isn’t the case with Urban Meyer, who has rivaled Shonda Rhimes when it comes to the number of scandals he’s been at the center of in recent months, including the report that he turned a blind eye to the physical and emotional abuse athletes were subjected to while playing under him at Florida.

However, the biggest controversy involving Meyer comes courtesy of Zach Smith, a former assistant coach who was accused of multiple instances of domestic violence against his wife.

After denying he knew of the allegations, Meyer admitted he was aware of the incidents but attempted to delegate the blame to everyone but himself.

Despite the best efforts of the Ohio State fans who learned nothing from the Penn State scandal, Meyer was eventually suspended for three games before issuing a half-assed apology for his role in the shitshow.

That seemed like the end of that but it turns out we’re only beginning.

Over the weekend, Smith went on an impressively unhinged Twitter rant while accusing Texas coach Tom Herman of cheating on his wife, because Smith is in more of a position than anyone to judge other people for how they act in their marriage.

Now, Smith is back in the news yet again thanks to a new report from Stadium that alleges he hurled racial slurs at former player Trevon Grimes during practice last year.

The entire story is worth a read but this is the incident at the center of it:

Trevon told his father he got into an altercation with Ohio State wide receivers coach Zach Smith at practice.

LeBron Grimes said his son told him that “Zach got up in his face and called him a ‘bitch ass n – – – – -’ and said, ‘I should have never recruited you.’ And then Trevon said something to Zach about him messing around with college girls.”

After the story broke, officials at the school issued a statement denying the allegations.

As The Cincinnati Inquirer notes, someone who was there during the altercation said they didn’t hear Smith utter the n-word while another says players wouldn’t have let it slide if he did.

I witness the whole altercation and this didn’t happen.. You think a group of African American young men will sit there and let something like this happen? Say what you want but this isn’t true at all. https://t.co/FrteEDIa9H

There’s no way that anyone would believe this. NO WAY. This lie is just out of hand. I was present during the entire altercation and what’s said in this article NEVER HAPPENED. I can guarantee it. Crazy how social media gives people platforms just to spread nonsense. https://t.co/FRBLucb9WY

Smith has been on an absolute Twitter rampage in the past few hours and is retweeting basically anyone who comes to his defense while going after McMurphy.

Hahahaha hahahahaha – you want to talk about reaching!! Now I’m a racist and got into a fight? You really must be bored Brett. Youre about to lose whatever credibility you had left, if any. https://t.co/BJPveyt00x

I’ve asked him multiple times. He won’t sit down with me. Because he knows he’s a phony and his reportings are inaccurate and lies. We can all wish though! https://t.co/XV80ZqOwlM

After talking with several lawyers… I honestly need to know how what @Brett_McMurphy is doing is not illegal. Publishing complete lies at my expense… but because I’m a “public figure” it’s ok? What is wrong with this world…

If you’ll excuse me, I’m off to make the pound of popcorn I’m going to need while watching this continue to unfold.