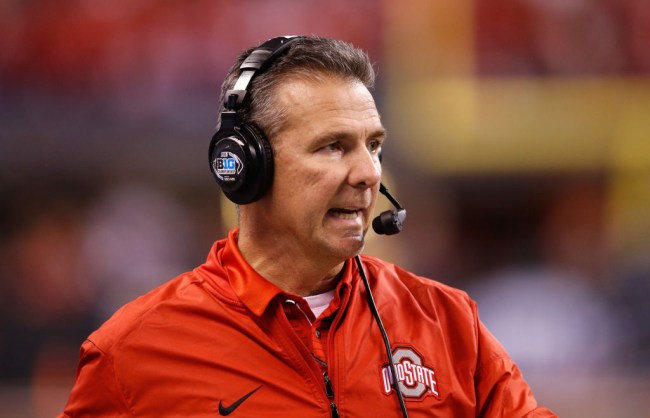 When I initially covered the piece, I said that I was going to have to make some popcorn to watch the drama unfold but it now looks like I’m going to have to hop on Amazon and buy an actual machine based on how things have developed since earlier today.

The article in question claims Smith yelled the word you think he yelled at freshman Trevon Grimes, who ultimately transferred to Florida and said the alleged incident was the catalyst for his decision.

People got Mad Online as soon as the supposed exposé hit the internet and many were quick to come to Smith’s defense, with one player acknowledging an argument had taken place but saying no slurs were uttered.

I witness the whole altercation and this didn’t happen.. You think a group of African American young men will sit there and let something like this happen? Say what you want but this isn’t true at all. https://t.co/FrteEDIa9H

Someone also dug up video of Grimes’ dad praising Meyer and the school for how they treated the family during his son’s time in Columbus.

But here's video released by Grimes' father this month in which he says “Urban Meyer and Ohio State were nothing but honorable to my son and our family.” pic.twitter.com/ByMD27oafe

Smith was at the center of another controversy this summer when it was revealed he’d assaulted his wife, and while Meyer denied having any knowledge of the incident, McMurphy was the man who ultimately implicated him in the scandal.

Text messages I have obtained, an exclusive interview w/the victim & other information I have learned shows Ohio State coach Urban Meyer knew in 2015 of domestic abuse allegations against a member of his coaching staff despite his denial last week https://t.co/fcxi8GKyeI

I think it’s safe to say there’s just a little bit of animosity between McMurphy and Meyer, and based on what the coach said on a conference call this afternoon, it doesn’t look like they’re going to talk things out over a beer anytime soon.

It can be assumed the legal action in question would be to sue McMurphy for libel, which would place the burden of proof on Meyer and Ohio State. However, based on the reactions so far, it seems like they won’t have much of a problem finding people who are willing to testify in defense of the coach and the program.

Can you die from eating too much popcorn? Because I think I’m about to find out.