Should The Cleveland Browns Hire Urban Meyer? As A Diehard Fan, Here Are 5 Reasons Why It Makes Zero Sense 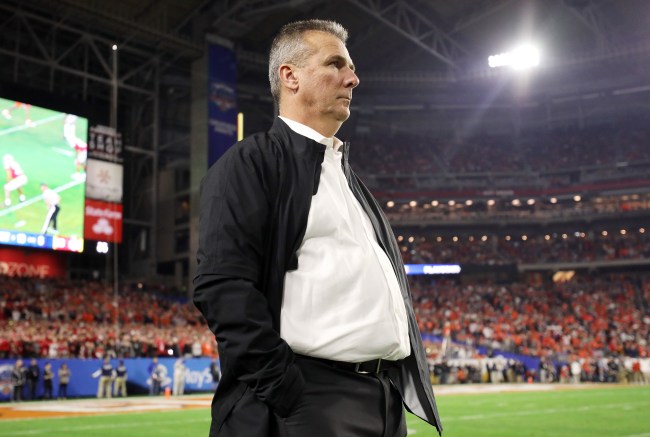 Urban Meyer was a hell of a college football coach, as he guided Utah to a Fiesta Bowl berth in 2004, then went on to even bigger things by winning three total national titles at both Florida (2) and Ohio State. As a born-and-bred Ohioan who took the Buckeyes to the promised land in the first ever College Football Playoff in 2014, Meyer is a football god in the state — I should know, since, you know, I’m a diehard OSU and (sadly) Cleveland Browns fan.

And, what do you know, just as the Brownies have a vacant head coaching opening, rumors are starting to swirl (again) that the beleaguered franchise reportedly have interest in hiring Urban Meyer. That’s according to longtime reporter Bruce Feldman, who recently tweeted out the news.

Now, don’t get me wrong, Urb is one of the best college football coaches to walk the planet — as proven by his addition on ESPN’s list of all-time coaches that was recently released — but does he have the chops to turn around a depressing franchise like the Cleveland Browns? To quote ESPN’s Lee Corso, “not so fast, my friend.”

While Browns fans are hoping for anything to give them hope that the 2020 NFL season will be way different than the dysfunctional 2019 one under recently fired Freddie Kitchens, Urban Meyer is not the answer. And, as a lifelong and diehard Browns fan, here are five simple reasons why the organization has to avoid the temptation of falling in love with the brand name that Meyer would bring, and instead focus their attention on a more polished head coaching candidate.

It’s one thing to take a flier on a guy who has at least been a coordinator or a position coach in the NFL, but to hire a guy with zero NFL coaching experience is always a risky proposition. Since the Browns are, well, the Browns, they’ve continue to ignore this rule over the years, hiring or interviewing hot college coaching names in the past like Butch Davis and Chip Kelly. Like Urban Meyer, both those guys were phenomenal at the collegiate level, but failed to produce the same results in the NFL.

Coaching NCAA players who have egos but aren’t making millions isn’t easy, but it’s a simpler task than coaching a locker room full of the best of the best football players in the world, while understanding how to build continuity, trust and chemistry in a locker room full of millionaires. Unfortunately, Meyer’s inexperience here would be too much of a risk for a team loaded with talent and personalities.

4. His Health Issues And Indecision

For every Browns fan out there hoping for Urban Meyer as head coach, have you completely forgotten about why he’s no longer coaching the Buckeyes in the first place? It wasn’t because of some scandal or old age, it was because the 55-year-old walked away from the dominant program because of his health. And, oh yeah, it wasn’t the first time Meyer did so, as he resigned from Florida for similar reasons a decade ago.

As part of those health issues, Meyer continues to flip flop between being interested in coaching and not. Does that sound like the kind of leader an NFL team needs? Knowing the Browns’ luck, Meyer will get hired, win 10 games in 2020, build optimism for 2021, then call it quits because he’s stressed. Yes, the football gods hate Cleveland this much.

3. The Franchise’s Need To Win Now

To be blunt, the Browns don’t have time to experiment with a first-time NFL coach like Urban Meyer — regardless of his success in college football.

Stacked with an offense that boasted two 1,000-yard receivers (Odell Beckham Jr. and Jarvis Landry), one of the top running backs in the league (Nick Chubb), as well as a former No. 1 overall pick who needs a strong third season to prove he’s the face of the franchise (Baker Mayfield), the team needs to win big in 2020.

By hiring Meyer, the front office would need to give him a long leash as a learning curve, meaning patience to right the ship. Think OBJ and Landry want to go through that again like they did under Kitchens in 2019?

2. It’s Another Flashy Move, But Not The Right One

When it comes to making headlines, the Cleveland Browns join the Dallas Cowboys as being the most successful team at doing so. Does that translate to wins? As 2019 proved, absolutely not.

Hiring Urban Meyer would be (another) flashy move by the Browns, giving talking heads on ESPN lots of material, while giving fans bragging rights that “this will be the year.” The Dawg Pound has uttered those words for 20 years now, and we have one crappy playoff performance to show for it.

Meyer would be the sentimental favorite of the fans because of his Ohio roots and the success he had in-state with the Buckeyes, but the right choice would be someone like Mike McCarthy, who might be a boring hire, but had over a decade of success in the NFL with the Green Bay Packers. It’s almost too obvious to go with McCarthy, which is why the Browns will most likely mess this thing up.

1. If Nick Saban Failed In The NFL, Why Wouldn’t Urban Meyer?

Obviously, Urban Meyer and Nick Saban are two different people, but the two are, arguably, the most iconic college football coaches of the past 15 years or so, so there are some similarities in terms of success. What some might forget is that Saban had a brief stint with the Miami Dolphins in 2005 and 2006, compiling a 15-17 record with the team before resigning to take the Alabama job. Would Meyer’s NFL resume look familiar?

Belichick and Saban in @Browns gear after beating Cowboys in ‘94. Man, we had a damn STAFF! @Reflog_18 pic.twitter.com/28cvItGcXP

Here’s the thing, though, Saban at least had some experience in the NFL before taking the Dolphins job, ironically enough, being the defensive coordinator for the Browns under Bill Belichick in the mid-90s. Given Saban flamed out with the Dolphins after just two seasons, it’s hard to imagine the same wouldn’t happen to Urban Meyer if given the opportunity in the NFL.

Point blank: Being a head coach in the NFL is way different than in college football, and even the best of the best aren’t cut out for the task.

The Cleveland Browns haven’t been relevant in about 30 years, and have constantly made the mistake of drafting the wrong guys (Johnny Manziel), hiring the wrong front office people and head coaches, failing to establish any winning culture at all, and showing an ineptitude to practice patience. Hiring Urban Meyer would be the latest example of an ownership that clearly has no idea what it’s doing, so, as a Browns fan, can we please bring new optimism in 2020 and not repeat the same mistakes that the past 20 years have brought us?