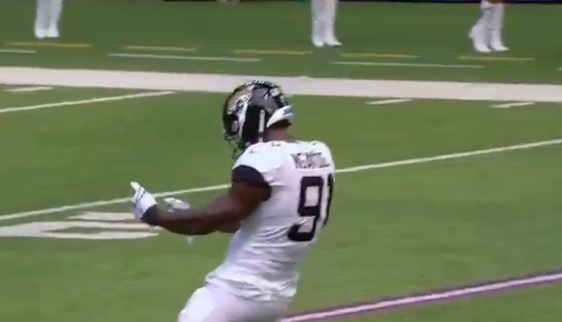 Jaguars defensive end Yannick Ngakoue is looking to start where he left off after making the Pro Bowl in his second season in the NFL.

During the offseason Ngakoue says he picked Broncos Von Miller’s brain to help improve his game.

“No, not really. Going back to the Pro Bowl, just chilling with my big bro Von [Miller], we just talk about pass rush a lot and that’s the side he loves to rush on a lot. Just kind of picked his brain a little bit about what moves to work on that side and he picked my brain on what moves to work on the other side so I could help him out, so that’s probably where I got that from.”

Early in today’s preseason game between the Jags and the Vikings, Ngakoue was able to sack Vikings QB Kirk Cousins in the first quarter but was penalized for his pelvic thrust celebration.

Of course everyone brought up the famous Key and Peele Hingle McCringleberry skit which explains that three pelvic pumps equals a penalty.

Yannick Ngakoue just sacked Kirk Cousins and got flagged afterward for #threepumps, which is, in fact, still an illegal celebration.

Should have pumped twice.