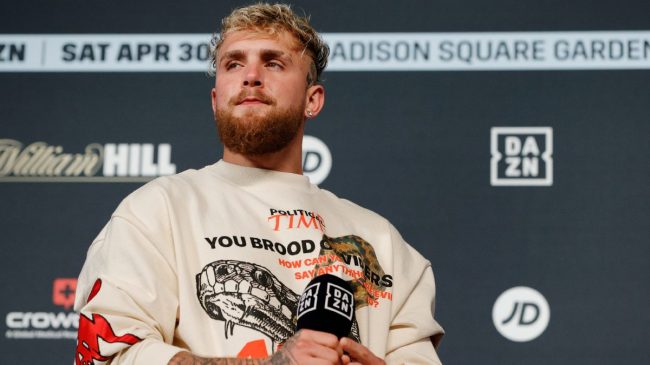 Jake Paul may not get invited to many celebrity softball games after seeing his latest showing in a BP session in Miami.

The boxer took the field Tuesday night ahead of the Marlins’ matchup with the Padres. After lining up in the batter’s box, though, Paul successfully whiffed on pitch after pitch.

Paul has always been confident in his abilities in any sport, which is one reason he’s been so successful at building his boxing career. Unfortunately, it often hurts him, too, as videos like this pop up on social media.

He’s already embarrassed himself on the pitch, looking stiff as a board while kicking a soccer ball. But this batting practice session certainly takes the cake.

Paul goes down on strikes after posting three straight swings and misses. The bat speed is slow, and his hands don’t get through the zone with much urgency.

Baseball fans on social media were quick to react to the now viral video, posting their responses on Twitter.

The social media reaction was not kind to Jake Paul after fans got a glimpse of his batting practice session. Take a look at the immediate response below.

Paul took the criticism lightly, making fun of himself after the whiffs.

this is my home run celebration (if I could hit lol) https://t.co/vQJ5DgkTow

Certainly not the best showing for Paul, but hey, he’s still a winner. How many people can say they took batting practice from an MLB batter’s box ahead of a game?