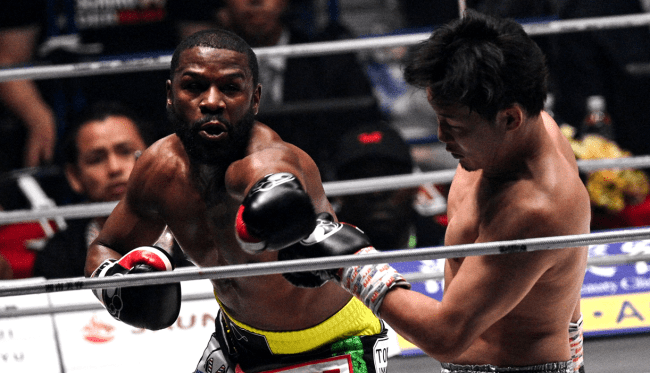 In case you missed it, undefeated boxing great Floyd Mayweather was back in the ring on Sunday. Mayweather took home another “exhibition” victory over a fighter no one knows at a Rizin event in Japan.

This time, Mayweather’s opponent, Mikuru Asakura, at least made it into the second round before being knocked out. Back in 2018, Floyd knocked out his Rizin opponent, kickboxer Tenshin Nasukawa, in less than three minutes.

A right hand from Floyd just before the bell brings an end to the bout, and Asakura suffers his first KO loss ‼️

“Alright, ladies and gentlemen, picture this: It’s 2022, Floyd Mayweather is ruining his legacy fighting no-name guys, wasting his fans money, wasting his fans time,” Jake Paul said Sunday on Twitter. “He doesn’t even know the names of the guys he’s fighting … to make some money to pay his tax bills. Floyd Mayweather telling Jake Paul that you will only fight Jake Paul if he comes down to his weight, 140 pounds or something. I can’t believe what’s going on in the world. I can’t believe this is real.

“But you’re going to find a way to dance around this. You’ve said, ‘Oh, once he finds a professional fighter, he’s going to get destroyed. It’ll be back for him.’ Why not let that be you? The best ever. There’s only one Mayweather. But he’s scared to fight Jake Paul. It’s 2022, I can’t believe what the f–k’s going on, guys. Goddammit.”

Sunday’s bout against Asakura occurred shortly after the “news” that a second Floyd Mayweather vs. Conor McGregor “fight” could actually be a thing that happens.

Should that event occur it would fit right into the 45-year-old Mayweather’s post-retirement plan to fight boxers who aren’t really boxers and make as many millions of dollars as possible.

After Mayweather fought YouTuber Logan Paul in the aforementioned exhibition bout in 2021 (where no winner was announced), boxing legend Manny Pacquiao shaded Floyd, saying, “I’m not like other boxers who fight only for the money. They will challenge non-boxers just for the money.”

One year later, Mayweather’s reputation has somehow gotten even worse. Now, not only is he fighting non-boxers for money, he is being called out by them. What a shame.