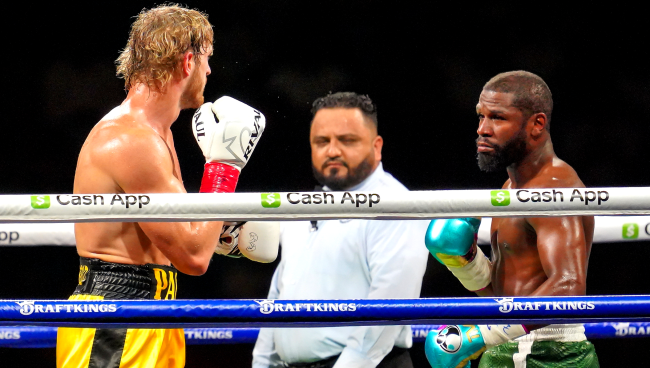 Back in June, YouTube star-turned-boxer Logan Paul went the the distance in a boxing match with Floyd Mayweather, the Boxing Writers Association of America’s “Fighter of the Decade” for the 2010s, and the greatest boxer of the last 25 years, according to ESPN in 2016,

Pretty much everyone was surprised when Paul, professional boxing record of 0-1 (the loss coming at the hands of British YouTuber KSI), was able to last the full eight rounds versus the 50-0 Mayweather, who won 15 major world championships during his career.

A plethora of boxing fans who watched the fight speculated that Mayweather even physically held Paul up after knocking him out during the fight. Something they both later denied.

After the match, Mayweather called his fight against Paul a “heist” and called the bout “a fake fight.”

Now, as if that wasn’t enough proof that the fight between the 44-year-old Mayweather and 26-year-old Paul wasn’t exactly on the level, a longtime member of Floyd’s entourage has spilled even more tea.

Floyd Mayweather chose not to knock-out Logan Paul in their multi-million-dollar exhibition fight in June because he didn’t want to hurt the YouTuber-turned-boxer, according to his cousin.

Dejuan Blake, who has been part of Mayweather’s boxing entourage since 2002, said despite calls from the wider boxing world and his own team to teach Paul a lesson and lay him out in the ring, the legendary fighter decided to let him go all eight rounds.

“Once again, it’s an exhibition, like Floyd said, he’s not a boxer, why would he want him to get hurt and not be able to go home and talk to his family,’ Blake told The Sun.

“One punch could change the game, why would he want to hurt him like that?”

Blake added, “A lot of people said, “You should knock him out for all the sh-t he’s talking, but at the end of the day, Floyd loves the sport that he’s been involved in, but he also hates what comes with the damage that comes after the sport is over/”

“Floyd is closer to his 50s than he is his 20s and he was able to capitalize on that generation, that youth, that young crowd,” Blake continued.

“It was a great experience, a great event. We did great numbers for a non-professional fight, it was a success.”

Financially, yes, it was a great success.

Especially, if, as one person commented, “More than likely is he had bets placed by anonymous people on the fight going the full 8 rounds. The bookies wouldn’t have expected the distance.”

After all, we do know that Floyd is certainly not afraid to make a big wager or two with all of the money he has earned.