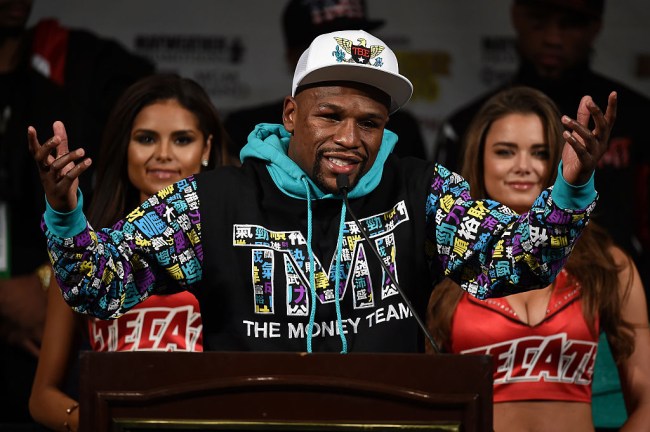 It’s been over a year since Floyd Mayweather Jr. punched Conor McGregor in the face a bunch of times on his way to winning one of the most hyped boxing matches in recent memory, and even if he embellished how much he made for the fight, he undoubtedly took home a fair amount of money for his troubles.

Depending on how you look at it, Mayweather either put his money to good use or terrible use after the bout, including buying a $25 million mansion or making the decision to drop $18 million on a watch.

The boxer wasn’t allowed to bet on himself ahead of the fight but he’s been on a gambling tear ever since and hasn’t been shy about bragging about his wins, whether we’re talking about the $90,000 he won betting on college football or the $101k poker jackpot he snapped up a few months ago.

However, you rarely come across a gambler who lets the world know when their bet doesn’t pay off, and it can be assumed Mayweather is no exception based on some rumors that are currently swirling in Vegas about his massive amount of gambling debt.

Mayweather recently announced he’d be coming out of retirement for the 127th time for a rematch with Manny Pacquiao that no one really asked for and at least one insider says his main motivation is to pay off betting losses that could total up to $50 million.

From Gambling Sources in Vegas:
Floyd Mayweather is down over $50 Million in gambling losses since 2017 he’s coming out of retirement to fight Manny Pacquiao
Probably will make 60-70 Million 💵🥊 makes sense @50cent was right about his finances

“You don’t really see many winners in those types of places. I certainly know he has a big-time gambling problem, from seeing him. He gambles on half-times and things like that.He shows what his wins are, never shows what the losses are.”

I’d like to thank Mayweather for making me feel great about the $20 parlay I lost this weekend.