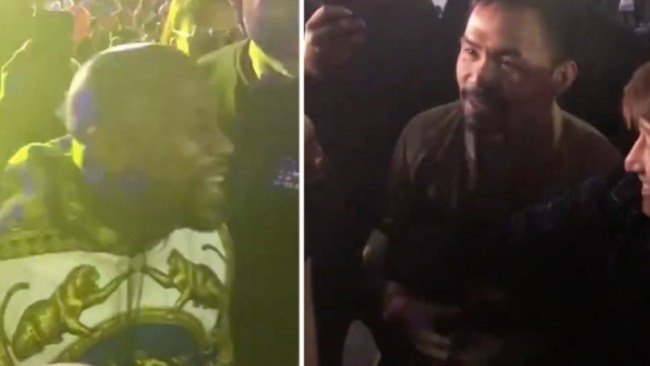 Floyd Mayweather Jr. will come out of retirement for the third time in his career to fight Manny Pacquiao. The rematch of the much-hyped 2015 boxing match between the two fighters will allegedly go down this year.

Early Saturday morning, Mayweather posted a video on his Instagram account, which has over 21.1 million followers, of the encounter of the two all-world boxers at a music festival in Tokyo. The caption on Mayweather’s Instagram post said: “I’m coming back to fight Manny Pacquiao this year another 9 figure pay day on the way.”

Pacquiao, who has over 4.3 million followers on Instagram, also posted a video of the confrontation at the concert.

The audio in the videos are difficult to hear at times, but Pacquiao told Mayweather, “I have the belt,” and Mayweather responded, “I’m going to take it from you like I did before. We gonna take the belt. We gonna get the payday. And I don’t want no shoulder excuses.”

After he lost the first fight, Pacquiao complained that he was hampered by a right shoulder injury. Mayweather earned a unanimous decision victory in the match at the MGM Grand in Las Vegas. The Money Man retained the WBA (Super), WBC, The Ring, and lineal welterweight titles, while also capturing the WBO title.

That “nine-figure payday” Mayweather is talking about would put this rematch winnings in the neighborhood of the first fight in May of 2015 where Floyd made approximately $220 million and the Filipino fighter got paid $100 million. The fight was the most lucrative boxing match of all-time.

The rematch is said to go down in December.

After his victory over Conor McGregor in August of 2017, Mayweather said he was done with boxing for good. Money Mayweather also retired back in 2007 after his fight with Ricky Hatton.

#WCW “WHOOP CONNOR WEDNESDAY” Everyone following me…repost this, come up with your own creative caption & tag me. Thanks in advance!

Pacquiao last fought in July when he defeating Lucas Matthysse to win a secondary welterweight title.