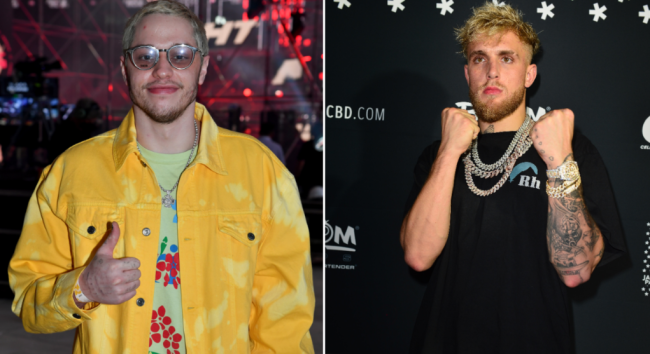 Before the Jake Paul-Ben Askren fight, Davidson, who was serving as the night’s host, went viral several times by mocking Paul during backstage segments.

Pete Davidson and Ben Askren bonding over how terrible a person Jake Paul “He is a piece of shit” pic.twitter.com/9cfk0mz4P3

Davidson even got censored by the broadcast after he asked Paul a question that made him uncomfortable.

Pete Davidson got muted after asking something that made Jake Paul uncomfortable backstage “You can’t joke about that” pic.twitter.com/uWKmAdgaPd

During an appearance on his brother Logan Paul’s podcast, Jake blasted Davidson and said the comedian would not be brought back as a host for his next fight.

CALL OUT: Pete Davidson called out by Jake Paul and his family. Jake's dad says "Can I fight that piece of sh*t?" Jake says it was his idea to have Pete host the event. Logan adds that Pete wants to host Jake's other boxing matches. Jake responds "F*ck that guy." pic.twitter.com/Nq6jy3rqsq

Fuck that guy…he won’t ever be a part of one of those ever again, he fucked that up…The shit he said is shit you can’t take back