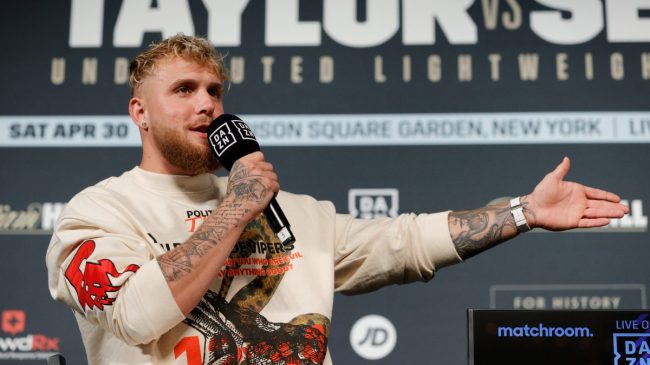 Jake Paul is at it again on social media. The boxer is calling out future opponent Tommy Fury for trying to slip out of their scheduled fight in August.

Last week, Paul went after Fury for not signing the contract for their August 6th matchup. The two went back and forth on Twitter before Fury seemingly agreed on the bout.

A day later, Paul announced that the paperwork had been sent over and that the highly anticipated fight would happen. But now, another obstacle has gotten in the way.

Tommy Fury’s visa was denied upon trying to enter the US. That poses a problem seeing as the matchup, which is just over a month away, is scheduled to take place in New York City at Madison Square Garden.

Paul is again targeting Fury, saying it’s just another excuse as he looks to back out of the upcoming fight.

Jake Paul calls out Tommy Fury after his visa gets denied

Jake Paul posted a number of tweets calling out Tommy Fury. Their originally scheduled press conference was supposed to take place today, but Paul says that Fury is in no rush to get to the US.

Tommy Fury is avoiding going to the embassy to get his visa. It’s been 36 hours with no action from his side, and per Tommy Fumbles style he missed the press conference today in NYC. pic.twitter.com/kyVfepGXFA

“Tommy, where the f–k you at? We’re in New York City. We’re supposed to have the press conference today. I’m still getting my miles in while you’re making excuses. Get to the embassy and go get your f–king visa. I’m going to knock you the f–k out August 6th.”

Shortly after that morning run, Paul posted another clip of him at MSG with an update.

Update: All Tommy Fury has to do is go to the embassy to make this fight happen. pic.twitter.com/J3dDDsNuMw

“Update: We’ve spoken to Tommy Fury’s lawyers. They are all advising him to just go to the embassy to get his visa. That’s all he has to do. But Tommy is showing no urgency. He hasn’t gone yet. He’s not communicating with us on what he’s doing. This is another case of ‘Tomy Fumbles’ just being scared to fight me.

He also believes that Fury and his family are trying to get Paul to travel overseas for the fight. Fury’s father is not allowed to enter the United States.

“I think the Fury family is trying to manipulate things here to make me fight in the UK. Ok, you want me to fight in the UK? Show me $15M. Here, in America, we do more PPV buys, more ticket sales, and we do more sponsorships. I’ve shown you the money, we’re ready to go. MSG, August 6th.

“Tommy, you’re going to miss out on the biggest payday of your life because you want me to come to the UK? Like I said, I’ll come there. Just show me the money. But y’all can’t do that. Y’all don’t have $15M. This is embarrassing.

“Go to the embassy, get you visa, and let’s make this thing happen. Stop ducking me and stop wasting my time.”

The saga continues. I’m sure Paul will let us know what Fury decides to do in another Twitter update soon.