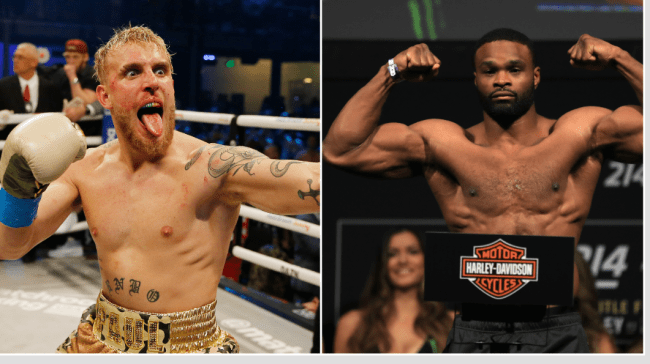 Jake Paul has his next opponent in his sights.

According to The Athletic’s Mike Coppinger, Paul will reportedly face former UFC welterweight champion Tyron Woodley in a boxing match in a date that will be disclosed at a later time. Woodley gets the opportunity to avenge his teammate Ben Askren’s loss to Paul. Woodley was in Askren’s corner when he was knocked out in the first round by Paul back in April.

BREAKING — Jake Paul and Tyron Woodley have agreed to a deal for a boxing match, sources tell @MikeCoppinger. pic.twitter.com/X0fwTnQppf

During an interview with TMZ two weeks ago, Woodley called Paul a “culture vulture” and said he was willing to knock his “fucking head off” in a boxing match.

Jake Paul is – well I guess we kind of recognize he came from Disney, we expect him to be this little f***ing Macho Macho Man that he’s playing,” Woodley told TMZ. “But he keeps calling out everybody but me. I’m the one with the real smoke with you.

“They just culture vultures. Like, he’ll ‘vult’ the juice from his own damn flesh and blood.”

“If Jake dropped his ball sack out his stomach and sign the deal, then I think Floyd would be happy that I’d be the one to knock his f***ing head off.”

Woodley and Paul will face off this Friday in Miami to promote the upcoming event.

Woodley is coming off four consecutive MMA losses with led him to part ways with UFC earlier this year.