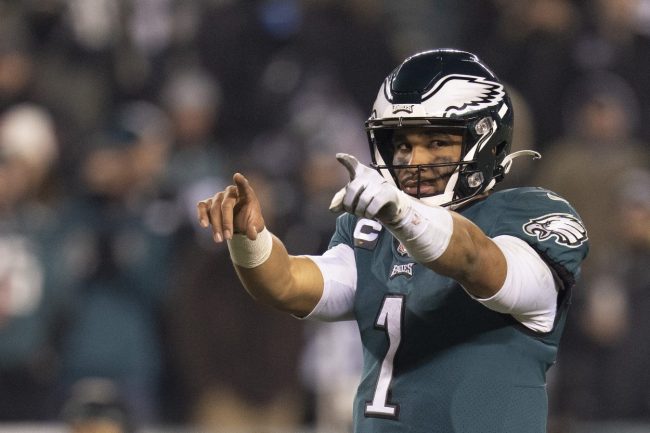 Following Sunday’s game against the Football Team, Eagles quarterback Jalen Hurts was involved in a near-tragic incident. As he was walking into the tunnel and back to the locker room, a group of Philadelphia fans nearly fell on top of him after a railing collapsed.

FedEx Field, where the game was held, is notorious for being a dump. Earlier this year, a pipe burst and leaked sewage onto fans in the stands.

Less than a full season later, the stands crumbled under a group of opposing fans and nearly took out a starting NFL quarterback. Hurts, who dipped out of the way at the last possible second, was okay. As were the fans who fell.

However, a fan-angle video shows just how close it was to disaster.

To solve the issue that caused what very easily could have been a catastrophe, the Washington Football Team used the cheapest possible option to fix the broken railing. It is such an unacceptable solution that it’s laugh-out-loud funny.

Except, had things gone differently by even six inches, it would not have been funny at all. The fans and Hurts could have been seriously injured.

He penned a letter to the Football Team on Tuesday, asking what it is doing to rectify the situation and keep it from happening again. The 23-year-old also cc’ed the NFL, asking what follow-up actions will be taken to avoid another “near-tragic” incident.

At the end of the letter, Hurts said that he looks forward to hearing from Washington and the NFL on the matter. He is expecting a response and will not let either party look the other way.

Good for Hurts. He could have easily chosen to move on, but did the right thing.

It will be interesting how Washington responds to his letter. A letter from a player to another organization is rather unprecedented so there is no protocol here. Yet again, so is a railing collapse, which simply should not be something the fans nor the players should ever have to worry about.