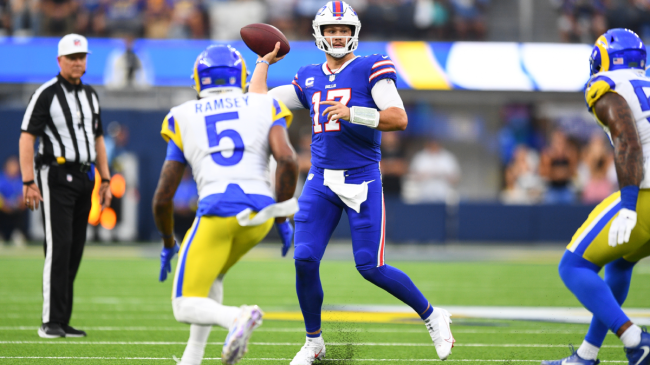 Josh Allen showed out in his 2022 season opener against the defending Super Champion Rams on Thursday night. The quarterback ended the contest with 297 yards and three touchdowns on 26/31 passing. He also led the team in rushing with 56 yards and a score in the 31-10 victory.

It was one of Allen’s better NFL performances on the big stage, proving the sportsbooks right for listing him as the MVP favorite for the upcoming campaign.

But not everyone was always confident that the passer would excel at the professional level.

A number of old “cold takes” surfaced last season with Allen putting on his best year to date. Now, another is going viral after Thursday’s 2022 season opener.

It comes from Rams’ defensive back Jalen Ramsey, who was absolutely cooked by Allen and Stefon Diggs. Diggs hauled in six catches for 122 yards and a touchdown, talking a little trash to the corner in the 21-point rout.

With the Rams getting destroyed, and Ramsey being embarrassed in the three-touchdown defeat, his old words are coming back to bite him.

Ramsey was not kind to Allen after his NFL Draft night, calling him “trash.” Take a look at what he had to say following Buffalo’s selection of the Wyoming signal caller.

Feels like it’s been forgotten because it happened five years ago, but Jalen Ramsey calling Josh Allen “trash” aged so poorly. pic.twitter.com/1nR5Nab7cw

“I think Allen is trash. I don’t care what nobody say. He’s trash. That’s a stupid draft pick to me. We play them this year, and I’m excited as hell.”

Is it possible to be more wrong?

Ramsey has found out the hard way about Allen’s abilities as this is not the first time he’s faced off against the passer. Ramsey has never beaten Allen, with the quarterback putting up some prolific numbers against those Ramsey-led defenses.

According to NFL analyst Warren Sharp:

Far from the “trash” that the cornerback describes. He’s likely wishing he hadn’t given that freezing cold take after the NFL Draft four years ago. If the two meet again this season, it will be in the Super Bowl. Maybe Ramsey can finally pick up a win versus Allen there.