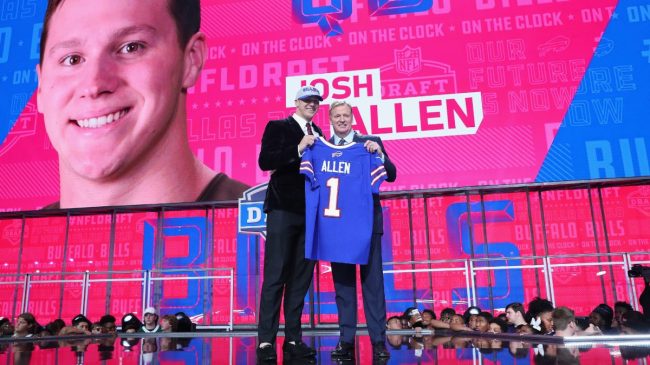 The Buffalo Bills drafted QB Josh Allen with their first selection in the 2018 NFL Draft and boy has it paid off.

Upon entering the league, Allen has developed into one of the sport’s most feared players. He boasts a cannon for an arm, an ability to create with his legs, and the size and athleticism to make defenders look silly.

Over four seasons in Buffalo, Allen has racked up over 14,000 passing yards. He’s helped the Bills win at least 10 games in each of his last three seasons, notching a pair of AFC East crowns in the process.

The Bills Mafia is certainly happy to have him now, but it wasn’t always so inviting.

Allen burst onto the NFL Draft scene following his junior season at Wyoming. Due to his playing for a small school on the West Coast, Allen and the Cowboys received very little exposure when it came to television and media.

Making things worse, many viewed the quarterback as a developmental project as opposed to clear cut starting signal caller. Sure, he had the size and the arm, but most feared that his meteoric rise in draft stock was due to potential rather than production.

And those naysayers did have a leg to stand on.

Allen completed just 56% of his passes as a college player. He also seemed to take a bit of a step back from his sophomore to junior season.

So, when Buffalo traded up to nab their quarterback of the future, fans weren’t happy. Check out some of the immediate reaction below.

See ya on the job market in 3 years beane

Welcome to buffalo JP Lossman the 2nd. Destined to be the worst pick in the draft. You moved up for failure Congrats. I won't be renewing my season tix

You guys are total idiots.

One commenter goes as far as to call Allen the second coming of JP Losman. Others note that they wanted Josh Rosen instead.

Traded up for Josh Allen???

Prediction:
ROSEN WILL BE ROOKIE IF THE YEAR.

THE BILLS ARE A JOKE!

Very bad pick! Rosen is miles above this guy. Allen will flame out of the NFL by year 2.

How in the world do you make this pick with Rosen and Lamar on the board REALLY….SMH

Luckily for the Bills, fans don’t make the draft decisions. Allen has become the face of the organization and he’s got them primed for a run at the Super Bowl.

These cold takes are a part of every NFL Draft. We’ll see who takes the honor in 2022.