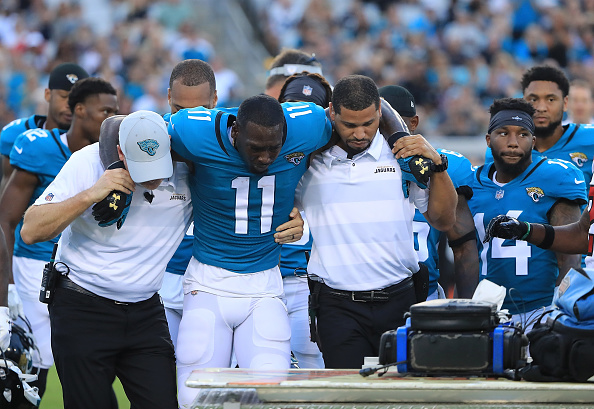 During Saturday’s preseason game between the Jags and the Falcons, Jacksonville jaguars WR Marqise Lee as forced to leave the game after suffering a brutal knee injury when he got tackled by Atlanta’s Damontae Kazee

Alright everyone who hates new helmet rule – did this hit deserve a flag? At time I’m typing this, Marqise Lee is still down. #ATLvsJAX pic.twitter.com/rkYEjfl9Pv

#Jaguars WR Marqise Lee was just carted off after suffering a knee injury against the #Falcons.

Kazee immediately took to Twitter to apologize to Lee for the hit.

Before i go out on the field i pray for both teams to stay healthy , i was just trying to make a football play, i will never ever try to hurt anyone, i just want to reach out to you bro and tell you that you’ll be in my prayers everyday 🙌🏾🙏🏾 @TeamLee1

Jaguars’ Jalen Ramsey spoke to ESPN and says he doesn’t blame Kazee for Lee’s injury but instead blames the NFL’s new helmet rule for making players “scared to tackle normal”.

You can’t be mad at 27 [Kazee],” cornerback Jalen Ramsey said. “You have to be mad at the NFL; not mad at them, but that is how the rule is. People are scared to tackle normal because I guess they don’t want to do helmet-to-helmet and get flagged. … Game-changing stuff could happen. You don’t really want to blame anyone, but you feel bad for him.

The Jaguars at the center of the #NFL helmet rule debate after top WR Marqise Lee goes down w/ a knee injury. Jalen Ramsey, Blake Bortles & Doug Marrone react after the game. Ramsey says "That's just how the rule is. People are scared to tackle normal." pic.twitter.com/6HzVLSYIbV

As for Lee, Jags coach Doug Marrone says the team will not know about the extent of his injury until doctors finish their examinations.

“Obviously it looked bad,” Marrone said. “Doctors told me, ‘Hey listen, we’re not going to be able to know anything until tomorrow, and we’ll have more information tomorrow on it.”’