Jalen Ramsey Finally Revealed, In An Amazing Interview, The Trash Talk That Made AJ Green Lose It 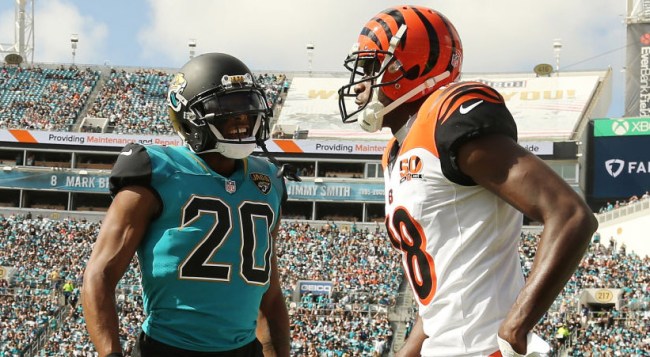 Ever since A.J. Green went full UFC on Jags DB Jalen Ramsey during Sunday’s game we’ve all been wondering what in the world did Ramsey say that caused the usually mild-mannered Green to absolutely snap.

We later found out that Ramsey tried to go after Green in the visitors locker room after both players were ejected.

We know that Green told Jacksonville.com after the game, “I should have walked off in that whole situation. I definitely learned from this experience. It’s never going to happen again. Whatever the punishment, I accept it. I put myself in that situation.”

We have also learned that neither Green nor Ramsey would be suspended by the NFL for their actions. (Not that Ramsey should have been since all he did was be on the receiving end of Green’s attempted beat down.)

Until today, however, we still hadn’t heard from either side as to what specifically led to Green’s meltdown.

In case you can’t listen to it right now, here’s some of what he said (though at some point you really do need to hear it coming from the man himself).

Jalen Ramsey, ladies and gentlemen. The man never, ever disappoints.

Safe to say Jalen Ramsey and Steve Smith are not going to be friends.

"He's a good player.. but I don't respect him as a man."#Jaguars pic.twitter.com/2sSypS02XD