Chris Webber And Jalen Rose Are Beefing, Still Hate Each Other After All These Years 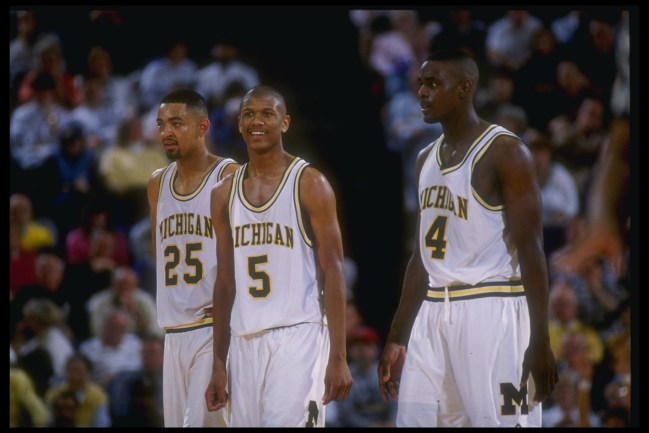 Jalen Rose and Chris Webber’s legacies have been tied for better or worse since the two Detroit natives were paired in Michigan’s 1991 stacked recruiting class, making up two of five players that would make up The Fab Five. Now successful analysts following long careers in the NBA, you won’t find the two former stars reminiscing over cold ones.

In Jalen Rose’s 2015 book titled ‘Give The People What They Want’, he admits that the he hasn’t talked to Webber in over five years for a multitude of reasons: Webber refusing to attend a Fab Five reunion and participate in a documentary, and tensions over Webber’s relationship with the late Michigan booster Ed Martin.

Their rocky relationship was highlighted most recently when Rose said he was excited he was to hear Webber would be an honorary captain at a Michigan football game later this year.

–@JalenRose reacts to Chris Webber accepting the invitation to be honorary captain at a Michigan football game pic.twitter.com/NfVFiIGBep

His words, transcribed by For The Win:

“I’m elated by this news. I’m not surprised by this news and, respectfully, it’s calculated, because he understands that he is a Hall of Fame-level player. And he has to turn around the thoughts of a lot of media members who didn’t select him. So, to me, I see this as the first step of him reigniting his Hall of Fame candidacy for public consumption.”

Webber appeared on Sway in the Morning to reveal that he’s making his own documentary as well as writing a book. Catch the interview here. Webber revealed that Rose broke an unwritten code to further his career.

“When he broke that code, to — what I feel — further his career, that hurt me as a man. … To give them what they want and become one of them now, when you can always be yourself and hold your integrity, that really hurt me. We’re brothers so I love him, but he was on some shit.”

"I don't need to talk about him to further my career."

–@JalenRose responds to Chris Webber's comments about him and the Fab Five pic.twitter.com/jGZ71RbEP8

“Everything that I’ve said about the journey at the University of Michigan and about the Fab Five was a ‘we’ thing, not a ‘me’ thing. … I don’t need to talk about him to further my career. I don’t sell out, I am not a media shield, I do not sell my soul in order to talk about sports on television.”

It will be interesting to see how hard Webber goes in on Rose and the Fab Five in his documentary and book. It sounds like he’s still super sensitive over The Timeout.