Jalen Rose Blows Stephen A. Smith’s Mind When Admitting He Voted Kyrie Irving Third-Team All NBA, Owns Up To The ‘Mistake’ 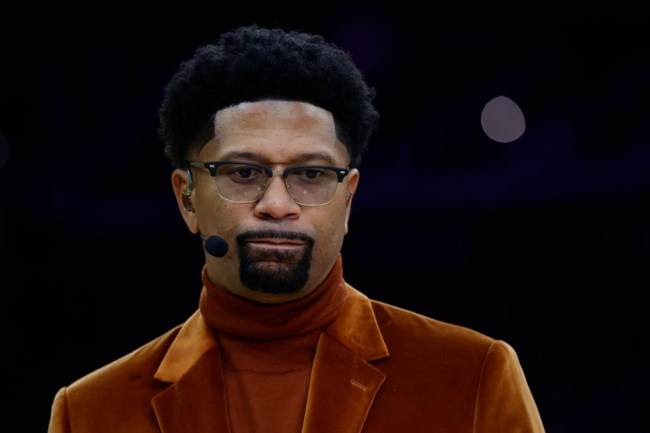 Outside of Joel Embiid not being named first-team All NBA, perhaps the biggest surprise from the voting was Kyrie Irving receiving one vote for third-team All NBA.

That lone vote came from Jalen Rose, who now regrets making that “mistake.” Rose was the only voter out of 100 who believed Irving was deserving of a spot.

While discussing the All-NBA team during ESPN’s pregame coverage of Game 5 between the Celtics and Heat, Rose said he needed to “fall on the sword” for voting for Irving.

Rose voting for Irving was clearly news to Stephen A. Smith, as he let out a classic “what!?” as soon as the words left Rose’s mouth. Smith looked like he wanted to jump across the table and slap some sense into Rose.

Jalen Rose admitted on NBA Countdown that it was a mistake to put Kyrie Irving on the All-NBA 3rd team. #NBATwitter #NetsLevel pic.twitter.com/x5jUl5svBX

Rose has the right to vote for any player he wants to, but it’s clear that as soon as he realized he was the one single person who voted for Irving, he knew he had made a mistake.

“I get mesmerized by his talent, but it was a mistake to put him on the third team,” Rose said. “I’m glad that didn’t cost Trae Young his spot, who deserves it more. I’m gonna own that.”

Credit to Rose for owning what was clearly a bad judgment call giving Irving a vote.

Irving is undoubtedly one of the most talented players in the NBA, but he played in just 29 games for the Nets this season. No player deserves a vote who played just 29 games.