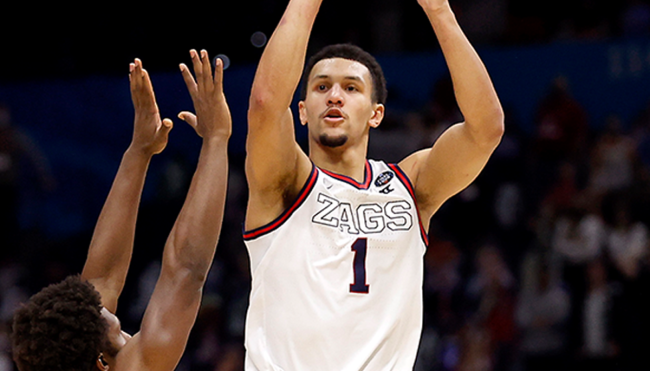 On Saturday night, we were treated to a March Madness Instant Classic™ courtesy of Gonzaga’s Jalen Suggs, who cemented himself as an NCAA Tournament legend when he pulled up from the parking lot in the closing seconds of a tie game and sent the Bulldogs to the championship by drilling a three at the buzzer.

The game’s final sequence was eerily reminiscent of what unfolded at the end of another postseason contest between the two schools in 2006. In that game, the Zags also had the opportunity to respond after UCLA hit a layup during clutch time but had the ball stolen before getting the chance to put a shot up, which led to a heartbroken Adam Morrison breaking into tears on the court—the same Adam Morrison who did not hide his excitement when he reacted to the dagger on a radio broadcast.

As was the case with Morrison, Jalen Suggs was one of the most exciting prospects in the country heading into this year’s tournament and his performance so far has only amped up the hype surrounding him. Only time will tell if he’ll be able to avoid befalling the same fate as Morrison when he takes his talents to the NBA, and while there’s little doubt he’ll be greeted with a nifty check upon his arrival, it’s hard not to think about the payday he’s missing out on due to his inability to profit off of his instantly iconic shot.

Last week, the NCAA took an absolute beating at the hands of the Supreme Court justices who tore its exploitative business model to shreds. It seems like it’s only a matter of time until student-athletes will finally be able to get paid for their name, image, and likeness, but based on what experts told Yahoo Sports, Suggs’ buzzer beater is just the latest reminder of how much money college players are missing out on due to the organization’s archaic stance on compensation.

Zach Soskin, the co-founder of an athlete management company, spoke to the outlet and said that if Suggs was A) not legally prohibited from playing his cards in the first place and B) managed to play those cards right, his clutch trey could’ve been “worth millions of dollars” over time based on the variety of ways he could’ve capitalized on it.

Soskin notes that the theoretical upside is fairly contingent on whether or not Gonzaga ultimately secures the title, but said that college players who find themselves thrust into the spotlight like Suggs could be able to land some lucrative (and potentially long-lasting) partnerships with high-profile sponsors from a young age if they were allowed to do so before graduating.

That may be the most obvious way to make bank, but Blake Lawrence, the CEO of a company that specializes in endorsement deals, noted there are plenty of other ways to capitalize. He estimates Suggs could’ve pulled in $175,000 thanks to the tournament by selling game-worn gear or even hopping on Twitch after the game to solicit “tips” from Bulldogs fans who would’ve been more than happy to show their gratitude by sending some virtual cash his way.

Again, things will probably pan out pretty well for Suggs when everything is said and done based on the many mock drafts that predict he’ll be one of the first players to have their name called this summer, but if you somehow needed more proof NCAA players are getting absolutely hosted, now you have some.