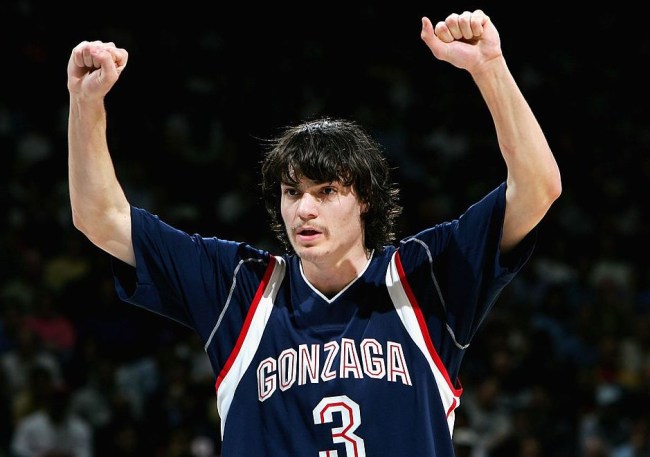 During any other year, March Madness would be in full swing, but with the NCAA Tournament getting canceled, college basketball fans have had to figure out how to get their fix.

With nothing to look forward to, I figured there is no better excuse to reflect on the past, and as a result, I’m planning on spending the next couple of weeks answering “Hey, whatever happened to that guy?” by looking back at some forgotten March Madness legends.

Over the years, there have been a number of guys who have played in the NCAA Tournament who I genuinely believed were pulling a Danny Almonte based on how out of place they looked compared to the rest of their competitors.

For example, Greg Oden was a 19-year-old in a 37-year-old’s body (terrible knees and all) when he helped lead Ohio State to the national championship game in 2007 and I’m pretty sure Perry Ellis played at Kansas for a full decade even though he was officially only there for four seasons.

The perpetually pubescent Adam Morrison was not one of those guys.

After bouncing around from place to place during his early childhood, Morrison’s family eventually settled down in Spokane, Washington. He was the son of a basketball coach, and while he failed to garner any real attention on the national level in high school, he showed enough promise to get a scholarship offer from Gonzaga and got the chance to take his talents to the next level with the hometown team he’d been a ballboy for.

When Morrison enrolled as a freshman in 2003, Mark Few had been coaching Gonzaga for four years and had seen immediate success, as the Bulldogs hadn’t missed a tournament with him at the helm and the burgeoning mid-major powerhouse made it all the way to the Sweet Sixteen during two of those runs (Few still hasn’t been absent from a single March Madness during his time at the school assuming you don’t count the recently aborted tournament).

Gonzaga continued to dominate the West Coast Conference after adding Morrison to the roster and made it to the tourney yet again as a two seed before being upset by Nevada in a second-round rout.

Morrison started attracting some buzz during a sophomore year where he averaged 19 points per game and helped the Bulldogs earn another berth (this time as a three seed) but they once again only managed to win a single game before getting knocked out by Texas Tech in a contest where Morrison tallied 25 points.

When Anthony Davis burst onto the scene in 2011,  players quickly learned to Fear the Brow™, but thanks to the revenge tour that was his junior year, Morrison was truly the O.G. when it came to guys sporting questionable patches of hair on their face who were able to instill a sense of dread in their opponents.

During the 2005-06 season, Morrison went on an absolute tear and there was virtually nobody who was capable of stopping him. He regularly scored over 30 points (and put up over 40 on five different occasions) and finished the season leading the nation in scoring to help Gonzaga to return to the tournament again.

The three-seeded Zags finally redeemed themselves by winning their first two games to make it to the Sweet Sixteen for a matchup against second-seeded UCLA. While it looked like a tight contest on paper, the Bulldogs pulled out to an early lead and were ahead by double digits for a solid chunk of the second half until abruptly forgetting how to play basketball.

Morrison hit a couple of free throws with 3:26 left on the clock to put Gonzaga ahead 71-62 but that would be the last time he or anyone else on his team put the ball through the hoop, as UCLA scored 11 unanswered points in a March Madness moment for the ages that ended with a member of the Bruins consoling a sobbing Morrison on the court.

The loss marked the end of Morrison’s college career, as he declared for the NBA Draft and was scooped up by the Bobcats with the third pick. However, he only started for half a season before being benched due to his all-around underwhelming play and his career came to a halt in 2007 after he tore his ACL.

A lot of people like to label him a bust but the same can be said for essentially every other person in his impressively forgettable draft class, and even though he wasn’t a major contributor during the two seasons he spent on the Lakers after recovering from injury, he still earned the honor of being able to refer to himself as a two-time NBA champion for the rest of his life.

Morrison attempted to come back from that injury by playing in Europe while trying to attract the attention of NBA teams but eventually accepted it was not to be before heading back to Gonzaga to finish his degree, where he briefly worked for the team he played for prior to stepping away in 2015.

Since then, he’s lived a largely quiet life on a fairly isolated piece of property outside of Spokane and spends his time playing poker, frequenting the golf course, collecting cars, and raising his three children with their mother (who he refers to as his “girlfriend” because he’s apparently vehemently against the institution of marriage).

However, his name has occasionally popped back up in the news.

Morrison always kind of looked like that kid in your high school who you went out of your way to be nice to in case he ever snapped one day, and as a result, it didn’t come as much of a shock when former Bulldog Kyle Wiltjer claimed he has a gun-filled apocalypse bunker, which Morrison says is untrue (the bunker part, not the gun part).

As of a couple of years ago, he was working as a radio broadcaster covering games at his alma mater, which retired his No. 3 jersey back in February.

Morrison might be gone but that mustache will live forever in our hearts.