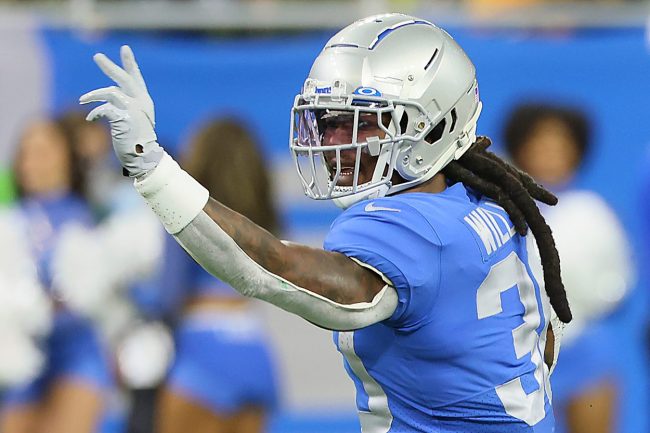 Running back Jamaal Williams was drafted out of BYU by the Packers in 2017 and spent the first four years of his career in Green Bay. Although he wasn’t the lead back, Williams was beloved by everybody in the organization.

Thus, when the team chose not to renew his contract, he and his teammates were bummed. Williams proceeded to get scooped up by the Lions and signed a two-year deal with Detroit prior to the 2021 season.

He immediately won over the fanbase and media with his happy-go-lucky, candid persona. Williams is one of the funniest and most genuine players in the NFL.

Earlier this year, prior to his first return to Wisconsin since his release, Williams spoke about what the Packers meant to him.

“If I could’ve stayed, I could’ve stayed,” he said to the media. “If I can’t, then they ain’t want me. Like that ex-girlfriend, I’ve gotta go. I’m happy I’ve got a rebound, named the Lions. They picked me up. Now they feeding me good, they taking me to dinner. One man’s trash is another man’s treasure.”

Over the course of the 2021 season, Williams carried the ball 153 times for an average of 3.9 yards per carry and found the end zone three times. His presence in the backfield was important from a rushing standpoint, but his persona was of even greater value in the locker room. He is just a great person who everybody wants to be around.

That notion rang true on Sunday.

Prior to the final regular season game of the year against the Packers, Williams stood in front of the tunnel and greeted his old team. Quite a few players, including Aaron Rodgers, stopped to give him some love.

Greeting his old team as they take the field @jswaggdaddy #Packers pic.twitter.com/KmveRQerBs

Clearly, of all the players in the NFL, Williams is amongst the most beloved. For him to meet his old team before the game is one thing. For them to each stop and give him a hug or dap him up, speaks wonders about who he is as a person.