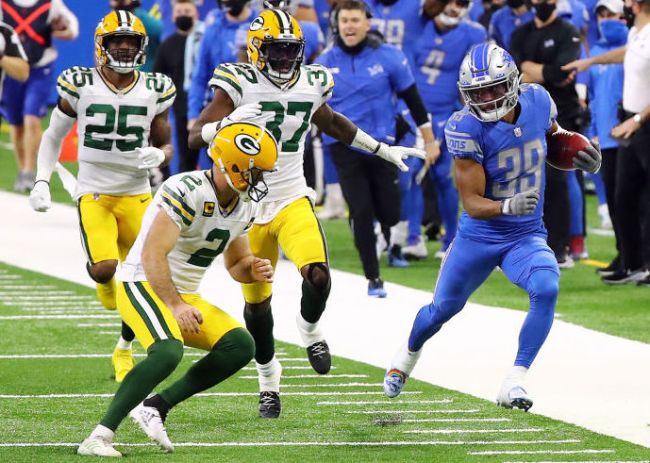 A couple of months ago, the NFL announced it had decided to call off this season’s Pro Bowl much to the dismay of the two people on the planet who care about a game that really just needs to be put out of its misery.

If I had to rank all of the exhibitions the biggest leagues use to showcase their most talented players based on entertainment value, I’d hesitate to even put the Pro Bowl on that list thanks to the almost impressive lack of enjoyment it’s capable of providing. As far as I’m concerned, they should’ve just packed it in after Sean Taylor sent Brian Moorman into another dimension during a fake punt in 2006, as I can’t imagine it’s possible to top what is literally the only memorable moment the Pro Bowl has produced in the 25 years I’ve been watching the NFL.

The only thing better than seeing kickers and punters get jacked up are those rare occasions where they manage to turn the tables by tracking down an opponent who was already thinking about which touchdown celebration to pull out before an unlikely hero spoiled things.

On Sunday, the Lions found themselves trailing the Packers late in the fourth quarter after Green Bay kicked a field goal to put them up by 10. With his team in need of a big play, Jamal Agnew fielded the kickoff deep in the end zone and proceeded to run the ball back 71 yards before Mason Crosby managed to knock him out of bounds.

Agnew had another defender pretty close on his tail before Crosby intervened, so while there’s no way to know if he would’ve been able to take it to the house if he’d managed to evade him, the Lions apparently declined to give him the benefit of the doubt, as the Detroit Free Press reports he had to cough up some dough to atone for committing the grave sin of getting tackled by a kicker.

The outlet spoke with special teams coordinator Brayden Coombs, who admitted he thought Agnew would’ve scored if he’d been able to avoid the hit and joked he’d doled out some discipline in the form of the world’s smallest fine, saying:

“It was good to see. I wish we could’ve finished it. Ag will have to put a couple dollars in the swear jar this week. We don’t get tackled by kickers and punters here. He’ll have to pony up there.”