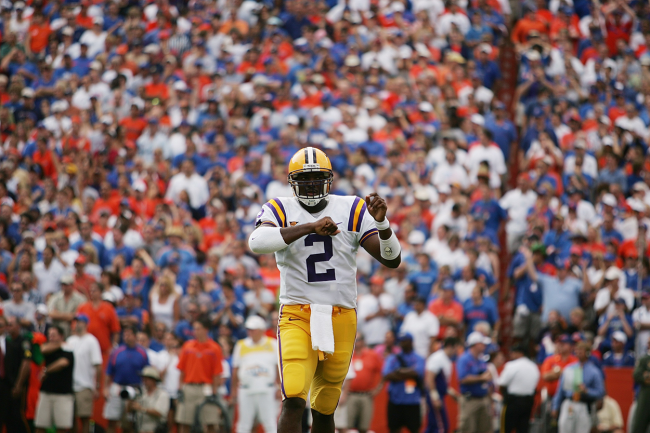 JaMarcus Russell is one of the best college football quarterbacks of all-time, but his career in the NFL was full of turmoil. After being drafted No. 1 overall in 2007 and signing a $68 million contract, the former national champion with the LSU Tigers was unable to stay on the field for a variety of reasons.

In a new letter to The Player’s Tribune, Russell sets the record straight. Titled ‘Y’all Don’t Know A Damn Thing About JaMarcus Russell,’ the extremely powerful, emotional, and honest essay allows JaMarcus Russell to tell his own story. From high school to college to the NFL to retirement.

FIND THE FULL ESSAY HERE, IT’S TRULY WORTH THE READ.

Of the many topics that Jamarcus Russell brings to the forefront in his letter, he discusses the NFL’s relationship with pain killers and raises a poignant question. It really makes you think.

To open the letter, Russell shares the story of the first time that he tried cough syrup— often known as codeine, lean or drank. He says it wasn’t the last time, which we know because he was arrested at his Mobile, Alabama home for being in possession of codeine syrup without a valid prescription on July 5, 2010.

But it goes deeper than that, Russell explains. He says that it was his way to cope with the pain. He says that painkillers, in form of pills, “were handed out like Skittles” at LSU and in the NFL.

However, he didn’t like the pain pills and he needed something to help him deal with his injuries. That’s when he turned to syrup.

“But I didn’t like the way they made me feel. So I handled it my way. When I was at LSU and I dislocated my shoulder against Georgia in the SEC Championship Game, I still had to go to my classes. I actually had shredded ligaments in my throwing hand, too. So I’m sitting in them hard-ass school chairs, and I can’t even concentrate. I was in so much pain that one morning I just said fuck it and took some drank with me to class. Had my little Styrofoam cup and everything. Looked just like a soda from the cafeteria. I don’t know how the hell the teacher even found out, but somebody in class snitched on me.”

That’s where Russell takes issue with the narrative that was written for him surrounding codeine.

Russell doesn’t understand how what he did was so abhorrent, but the players who were pumped full of pain pills were not seen in the same way. They were both dealing with pain in the best way they knew how.

“You know what’s crazy to me? If I had three or four pills in my pocket, nobody would’ve batted an eye.”

He continued on to explain that he was honest with his coaches at LSU and that they understood, at least to some extent.

“I mean, it’s 10 o’clock in the morning. It ain’t for fun, you feel me? I’m in pain, and that’s just how I knew to deal with it. I was honest with the coaches about what was going on, and they knew me as a person, so they handled it quietly. I did my punishment, which was not attending the bowl game, and we kept it movin’.”

“I ain’t no saint, but come on, man. They shoot your ass up with the strongest painkillers on earth just to get you out on the field. But you’re drinking some cough syrup and now you’re a criminal?”

From there, he detailed the rampant use of other substances used to cope with the pain in college and the NFL.

“Do you even know the kind of pain you’re in week-to-week playing football? I played a whole season in the NFL with broken bones in my ankle. We all got ways to cope. Some taking pills, some sippin’ syrup, some drinking heavy, some smoking weed. Shit, some even snorting cocaine. One way or another, you’re gonna numb the pain.”

And then Russell raised the same question as before in a different way.

“But as long as you getting your fix from the team, it’s all good, right? I’m just being honest. And they don’t like you being honest.”

In the Player’s Tribune essay, Russell continues to share his story and describe his relationship with his family, football, and drugs in his own words. It’s extremely powerful, and he provokes some very important, introspective thoughts and ideas.