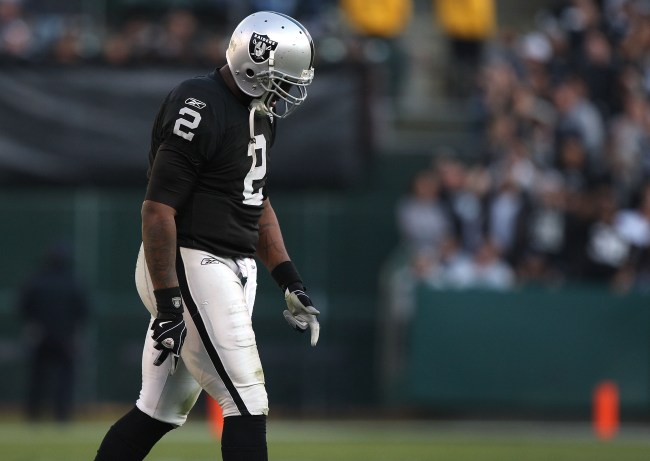 Of all the NFL busts in the history of the league, it’s hard to find one worse than JaMarcus Russell. The former No. 1 overall pick by the Oakland Raiders in the 2007 NFL Draft, Russell could throw the ball a fucking mile, but he didn’t possess one major trait in order to become a franchise quarterback: work ethic.

Blessed with a cannon for an arm and a bunch of other physical traits, JaMarcus Russell never did anything to help himself, getting by on raw talent alone. That’s why he (essentially) ate his way out of the league just 25 games into his career, and fell on hard times towards the end of his brief stint in Oakland. It’s a sad tail, but one that other young players can turn to in order to keep themselves on the right track.

And for those who wonder how the hell Russell could’ve fallen so hard and so fast while playing for the Raiders, one of his former teammates, fellow signal-caller Bruce Gradkowski, perfectly summed up the reason — and it involved JaMarcus’ laziness.

Talking to a group of media and some former players, Gradkowski told an A+ story about how he and his other teammate at the time (quarterback Charlie Frye) would find unique ways to get JaMarcus Russell to actually, you know, do his job. When it came to specifically referring to watching film, Gradkowski said he and Frye would bribe Russell with 10 Jr. Bacon Cheeseburgers from Wendy’s, which is both sad and hilarious. Take a look below at the story.

It’s been 13 years since the Raiders made JaMarcus Russell the No. 1 pick in the NFL Draft, yet, here we are watching a group of former teammates, players and media members still laughing at his fall from grace. As if it weren’t bad enough that the dude flopped out of the league faster than he could eat a ham sandwich — which, by all accounts, was pretty fast — Russell still has guys clowning on him about his lack of discipline and commitment to football while he was still just 20-something years old. Tough scene.