Ja’Marr Chase Blames His Drops On The NFL Ball Being Bigger Than The NCAA Ball, Having No Stripes 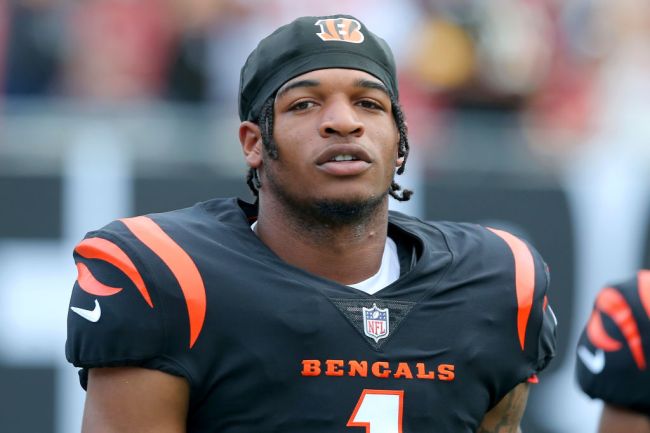 The story for Ja’Marr Chase throughout Bengals training camp and preseason games hasn’t been about him torching defenses and emerging as a true top target for Joe Burrow. Instead, it’s been about him dropping passes, and now he’s pinning some of the blame on the actual football itself.

The NFL and NCAA footballs are different, and in most cases, the college ball is slightly smaller than the NFL ball. Also, balls used in college have white stripes on both ends, while the NFL ball does not. This is an issue for Chase.

“The ball is different because it is bigger,” Chase told Bengals.com. “It doesn’t have the white stripes on the side so you can’t see the ball coming from the tip point so you actually have to look for the strings on the ball at the top, which is hard to see because whole ball is brown and you have the six strings that are white. But for the most part, just have to get used to it and find out what I am comfortable with catching.”

Cincinnati fans will surely love that statement from Chase, who sat out the 2020 college season at LSU to get healthy and prepare for the NFL. Chase even mentioned sitting out last year may be the root cause of him being rusty.

“I don’t want to blame it on me sitting on my butt the whole year, but it probably had something to do with it, of course,” Chase said. “There’s a bigger ball adjustment, so I don’t want to make excuses but I’ve just got to be a pro and make the catch.”

Every rookie has to make an adjustment to the ball, Chase certainly isn’t the only wide receiver going through some growing pains.

Lucky for him, preseason games don’t matter. If he becomes a steady pass-catcher during the regular season and gets into the endzone, nobody will remember this.