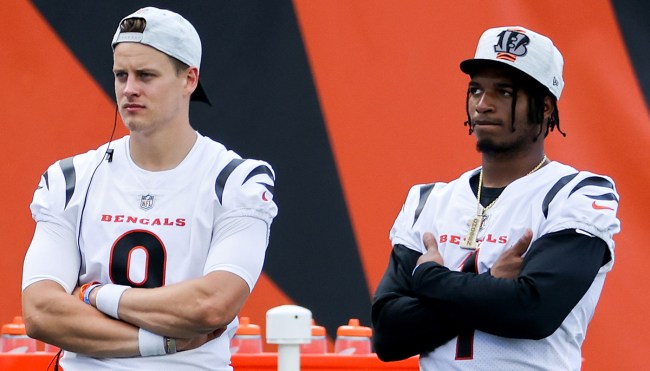 It’s still fairly hard to believe the Cincinnati Bengals will be playing in the Super Bowl just two years after finishing in the basement of the NFL with a 2-14 record, an abysmal performance that earned them the right to draft a savior in the form of Joe Burrow.

The man who quickly ascended to the Franchise Quarterback throne obviously played a major role in the team’s dramatic turnaround, but he’s gotten plenty of help from his teammates—including Ja’Marr Chase.

On Thursday, the wide receiver deservedly earned Offensive Rookie of the Year honors thanks to the standout season he’s had since being drafted with the fifth overall pick. He and Burrow picked off right where they left off while playing together at LSU, and based on a story that surfaced earlier this week, they’ve had a great chance to build their chemistry thanks to the move Chase pulled after he was selected by the Bengals last year.

On Wednesday’s installment of Hear That Podcast Growlin’, The Athletic‘s Paul Dehner Jr. shared an incredible anecdote about Chase going house hunting in Cincinnati after moving there last year and deciding he wanted to be neighbors with his QB (the story kicks off around the 10:40 mark):

“When Ja’Marr Chase moved to Cincinnati, he was looking for a place to live, and he said, ‘Well, I want to live next to Joe Burrow.’ So what did he do? He went down to the street Joe Burrow lives on, and he went door-to-door—knocking on every door—offering to buy their house. Because what else do you do when you’re rich and want to live next to your buddy?

Guess what? He bought one! Somebody sold him his house, so he lives next to Joe Burrow on their little street and they’re like one big happy family.”